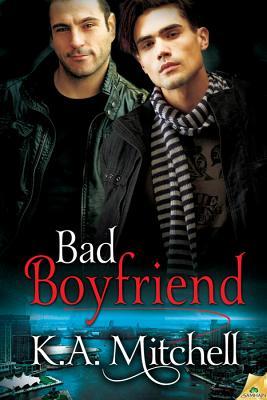 Sometimes it’s good to be bad. Real good…
After Eli Wright came out, his parents threw him out. In the five years since, he’s made his own way, lived by his own rules, determined to never change himself—not for anyone. He’s not against finding Mr. Right, but Mr. Right Now will do just fine.
Quinn Maloney’s reward for ten years of faithfully keeping his closeted boyfriend’s secrets? A hell of a wake-up call to go with his morning coffee. Not only did Peter have affairs, he went straight to marry his pregnant girlfriend—and Quinn was to never reveal their history.
With the baby’s baptism looming and Quinn expected to put on a polite front, he decides he’s had enough of playing the peacekeeper. One wink from a much younger, eyeliner-wearing guy in a bar, and Quinn’s found a perfectly outrageous date for the occasion.
The date goes better than he ever imagined. And so much worse, as Eli convinces everyone they’re madly in love. That wasn’t part of the plan, but the more Quinn learns about the man behind the makeup, the more he wishes it was true.

I was so excited to get my hands on this second installment and to get to read Eli’s story. I really like the writing skills of this author and how she throws reality and angst into her stories. People may say I’m a sap, but I love getting sucked into a story and know there’s real life situations thrown in and life isn’t always unicorns and rainbows. In the end, you get your HEA, but you have to have an array of emotions to get there.

Eli is this energetic and full of spunk twink that lives in the moment. He’s not looking for any kind of relationship other than the feel-good night and sort names out later kind. Eli loves older men and daddy play. When he sees this hot older man at the club and winks at him, he had no idea what he was getting into.

Quin was with Peter for ten years, but Peter informs him that he’s actually not gay and had gotten a woman pregnant. Quin can’t believe how pathetic he is as he agrees to be the babies godfather and stand up for Peter in his wedding. Quin goes to the bar with his buddies, and when this adorable little fireball winks at him, he comes up with the perfect plan.

The chemistry these two have their first night is not only hot but mind-blowing for them both. Quin asks Eli to a baptism and to help him flaunt his gayness. Well, Eli is over the top and really puts on a show. The plan backfires and has convinced Peter’s family how in love they are, so much so that they get invited to more family functions. Eli can’t deal with Quin’s baggage, and Quin can’t deal Eli’s dramatics. Will they be able to figure things out or just be sexual beings for each other? Will Peter ever admit he’s gay? Will Quin ever truly be able to let Peter go? Will Eli be able to wait for Quin?

I hope you enjoy this series as much as I am and I can’t wait for the next book!