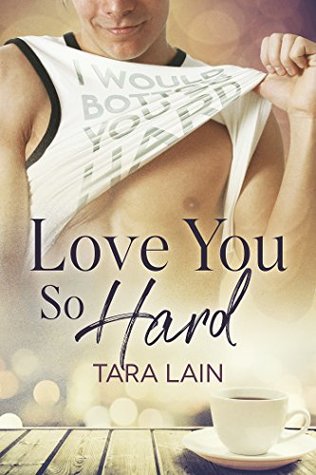 A Love You So Story
Craig Elson’s life has hit rock bottom. Even though he’s one of the best strategic planners around, a more confident guy takes credit for his work, and despite being a good-looking man, he suffers insults from the slimiest creep at the bar. Taking care of his beloved mom, who has Alzheimer’s, uses all his funds, leaving him in a plain, depressing car… and a plain, depressing life.
Until he sees gorgeous grad student Jesse Randall and his T-shirt that reads “I Would Bottom You So Hard.” The message seeps into Craig’s soul, and he asks Jesse to teach him to top.
Jesse’s had his eye on the quiet hottie who comes into the coffee shop, and he’s more than eager to perfect his tutoring. He sets out to get Craig a new job, a new apartment, and a new life so far outside plain and depressing that it’s unrecognizable.The problem is, Craig loves his lessons—and his teacher—too much to want to graduate. How can Craig reach the top without losing his sassy bottom?

Love You So Hard is the first book in the Love You So series by Tara Lain. I thought this was such a cute novella. Fans of Tara Lain’s books will not be disappointed. She managed to whisk me away from reality, and for a couple of hours, I was immersed in the world of Craig and Jesse. This is another of her stories that take place in and around Laguna Beach. The story was well written, detailed, and had loveable characters.

I liked Craig. He was so very boring and had such low self-esteem that he allowed everybody to walk all over him. He has a great job, but it isn’t until he’s passed up for a promotion that he realizes that his more confident coworker has been stealing his ideas and passing them off as his own. Feeling blindsided he decides to take vacation time and reevaluate his life and make some changes. He doesn’t want to be Mr. Boring Unseen Guy anymore. He has a crush on a guy that came into the coffee shop wearing a t-shirt that said: “I Would Bottom You So Hard.” He overhears that his crush is a student who tutors for money and he decides to ask him if he would tutor him in being a top. Even though Craig is thirty-two all he’s ever been allowed to do is bottom. Jesse agrees to tutor him in being a top and also help him remodel his self-image and his life.

I loved Jesse. He is so happy, fun loving, and confident. He knew what he wanted to do with his future and he was very honest and sweet. Basically, he was everything that Craig wasn’t. Although, they were both sweet and caring men. There were plenty of steamy hot scenes between the two and lots of chemistry.

The only thing that would have made this book better is if we’d gotten Jesse’s POV also. The story was told through Craig’s POV only. I was also bummed that the book ended at eighty-one percent. And while I was excited to find out that there’s going to be another book in the series, I would have loved nineteen percent more of Craig and Jesse’s story.

One thought on “Review: “Love You So Hard” by Tara Lain”