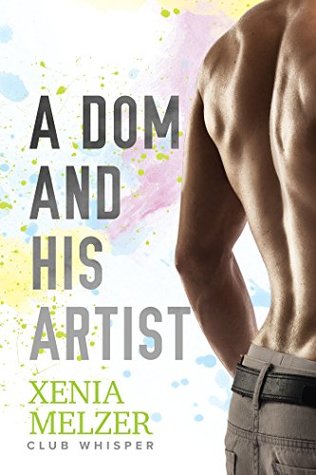 Sometimes the perfect man can be found in the most unexpected place….
Martin Carmichael owns a security firm and is part owner of Club Whisper. He’s a Dom in search of the right guy, and when his car breaks down on a lonely stretch of road, he thinks he might have found him.
Artist Collin Malloy is talented, easygoing, but somewhat insecure. Still, he has a big heart and is quick to offer help when he sees Martin in need. To thank him, Martin invites Collin to dinner, where the attraction between them becomes harder to resist.
But what will become of their budding relationship when Martin reveals that he likes his men bound, submissive, and in pain? Is it something Collin can accept… and possibly enjoy exploring? Even if he can, Collin has a secret of his own—a secret he doesn’t even realize he’s keeping.

I have become such a fan of this series. This is the second book and, as it can be read as a stand-alone, I suggest reading A Dom and His Writer. It will give you the background of the characters and the Club Whisper. This author has really captured what it’s like to be a Dom that falls in love. A good Dom in love doesn’t have to be a hardnose but can get all squishy and loving. A Dom in the bedroom is one thing, but a Sub that has captured his heart out of the bedroom is a whole other aspect.

Collin sees this mafia looking man broke down on the side of the road and pulled over to help him. He sees right through the mafia persona and tells the man exactly what he sees. Collin has this ability of talking so fast and about so many things in a single breath, it’s hard to grasp everything he’s saying. He gives Martin a ride, and Martin promises to call for dinner to pay Collin back for stopping. When he doesn’t call, Collin gets insecure and knows he won’t. The next morning, Martin calls and sparks fly from their first dinner.

It’s soon learned that Collin is an amazing artist and his best friend from childhood, Jude, helps sell his work. Jude took Collin in when his parents kicked him out, of course for being gay, but Jude has protected Collin from the world and how successful of an artist he really is.

I really enjoyed watching Martin go from Dom that loved inflicting pain to a squishy man that loved cuddling with his Sub. But Martin doesn’t mess around when you mess with the love of his life. This book has a little bit of everything. I fell in love with Collin and his innocence. He’s just so adorable, and the speed of his brain was something to be in awe of. I can’t wait for the next book.