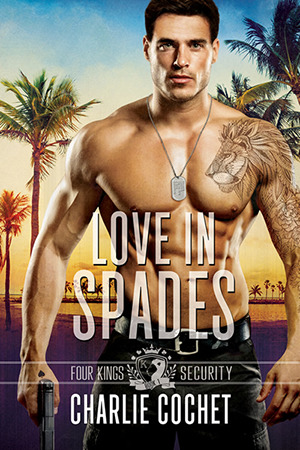 Ex-Special Forces soldier Anston “Ace” Sharpe is fighting a different battle these days—one involving the world of private security across the state of Florida. As part owner of Four Kings Security, Ace and his fellow Kings tackle everything from armed transport and investigations to cyber intelligence and executive protection. Cocky, fearless, and brash, Ace isn’t afraid to take risks.
After years of working alongside his father, Colton Connolly is ready to take the helm at Connolly Maritime, but his father’s retirement is put on hold when Colton begins receiving death threats. If that isn’t bad enough, his father signs a contract with Four Kings Security to provide Colton with round-the-clock protection, despite his adamant refusal. Colton’s life has been turned upside down, the last thing he needs is a shadow, especially in the form of infuriating, sexy-as-sin Ace Sharpe, who seems to be on a mission to drive Colton mad.
Sparks fly the moment Colton and Ace meet on a sultry night club dance floor. But getting involved with a client, even one as fiery and beautiful as Colton Connolly, is a line Ace is unwilling to cross. Colton might be attracted to Ace, but he’d been burned before. He might be willing to put his life in Ace’s hands, but not his heart.
As the Florida nights heat up, so does their passion, and Ace and Colton are faced with a difficult choice—take the plunge and risk it all, or play it safe and walk away?
If Ace can keep a deadly threat from robbing Colton of a future….

Here we go! A new journey promised by Charlie Cochet with her Kings…Four Kings Security, the company owned by King, Ace, Red, and Lucky but the team has more members than this four. They are all brothers-in-arms, ex-marines and after a tragic event, they decided to stick together and make their own way to success.

Now Four Kings Security is one of the most prestigious security company in states. Their clientele is high elites, multibillionaire clients, VIPs, actors, models etc. Everybody wants them for their professional, high tech equipment and sense of moral and duty toward their customers.

When Colton Connolly’s father approaches Four Kings Security, he is in need of protection for his only son, the heir of his Maritime company. Colton is out and proud, and his father couldn’t be more proud and supportive of his son. The homophobic treats he’s getting, worries his father to a no end.
Colton has a different opinion about this. He’s is not happy that his father went behind his back and signed a contract with the Kings, a contract that only his father could end.
Colton likes to be in control of his life, for reasons you will find out reading this book.

Anston Sharpe aka Ace, is an outgoing, cheerful guy, who takes his job seriously and also his style that drives King crazy. His non-conventional methods are famous, but despite all of that, he seems to be one of the most efficient on his team.
He’s assigned to this case, after a major “run down” with some thugs who tried to steal from their clients. All Miami Vice style.
He’s warned by Colton’s father that his son can be a bit strong-headed when it comes to his freedom. Ace is confident he could manage Colton, him also being strong-headed (read: real asshole).

Their first encounter is epic, leaving both men breathless.
Ace never felt like this before, he knows he needs to keep as much emotional and physical distance as he can from Colton. That seems a futile effort on his part. Colton is acting out, hates that his life is in the hands of Ace, who irritates him and turns him on at the same time.

We already know Charlie’s men, funny strong and also a bit “girlish”. I enjoyed reading this book as much as I did THIRDS (well, when we talk about Charlie Cochet it’s inevitable mentioning the guys now, isn’t it?). We also already know the MC’s of the next book, but I’m not spoiling!

Guys I recommend this book, if you liked THIRDS you would enjoy this series just as much!