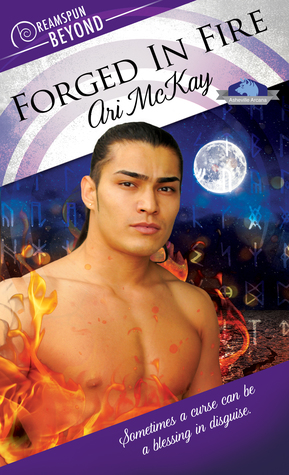 The magic touch.
Ever since Harlan Edgewood was bitten by a possessed werewolf, his monthly shifts have been agonizing. When he meets Whimsy Hickes—a mage who specializes in transformation—the attraction is mutual. But Harlan believes his curse is too great a burden to inflict on any romantic partner.
Fortunately, Whimsy thinks he can help.
When Harlan is provoked into an unexpected change, Whimsy uses his magic to help ease Harlan’s pain, but with an unexpected consequence. While he’s shifted, Harlan’s wolf claims Whimsy as his mate.
As they draw closer, suspicious events in the Asheville magical community escalate. Shifters are disappearing, others are murdered, and Harlan’s curse makes him an obvious target. It will take all of Whimsy’s magic to force back the rising evil—and if he fails, Harlan will lose not only his life, but his very soul.

Harlan is a lycanthrope, meaning a possessed werewolf bit him and had been turned. He can’t change at will like a born werewolf, but he’s compelled to do it at each full moon in atrocious pain.

Whimsy is a mage specialized in transformation and transmutation, so when he meets Harlan, he knows he can help him for his transformation and not because the man is handsome, just because he can’t stand the pain for him.
Harlan refuses Whimsy help, refuses to put him in danger with his curse. But when the next transformation comes, something that neither Harlan and Whimsy would have predicted happened, and they will have to work on it while trying to figure out who’s trying to hurt their paranormal community…. Again!

Forged in Fire is book 2 of the Asheville Arcana series. I was happy to read this sequel because I really enjoyed book 1 Out of the Ashes .

Whimsy and Harlan are adorable.

Harlan is a Quaker, he was born in 1696 and was bitten by a possessed werewolf. For the next three centuries, Harlan had a lonely life. The werewolves mostly don’t trust him or don’t consider him like one of their own. Besides, he has to fight an excruciating pain at each full moon, and then he has to fight the twenty-eight other days the “beast” inside him in order to stay in control. I was sad for him since he was so lonely, so use to be rejected. When he meets Whimsy and started to hope for a better life, it was adorable. Harlan has old manners. I won’t tell you what I mean by “Old manners” but, let just say that I totally like this idea from the authors. A huge, buff lycanthrope with the manners of the 17th century… I love it.

Whimsy is my favorite. He’s half Cherokee, barely five-foot-ten, and he’s very young in comparison to other sup at just twenty-eight years old, a baby for Harlan. But he’s a total badass, and I totally adored him. The guy doesn’t hold back; he’s straightforward and doesn’t hide behind excuses. He’s honest, open with a big heart. I totally love him, especially when he wiped the floor with his enemies.

The story takes place a year after the events in book 1, and even if life seems to be normal in Asheville, Arden, Eli and Julian as for as Whimsy and now Harlan, they keep going to investigate. They know the danger isn’t far. The investigation’s part of the story is a secondary plan since the plot was mostly concentrated on Whimsy and Harlan’s story.

It’s 4 OptimuMMs for the Quaker and his Mage.