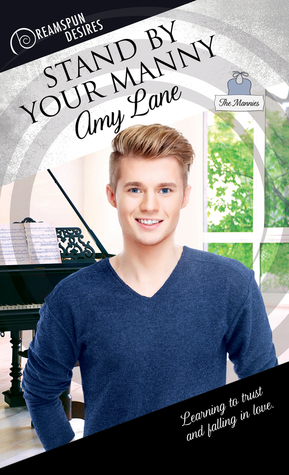 The Mannies: Book Three
Learning to trust and falling in love.
Sammy Lowell has his hands full juggling his music, college, some pesky health problems, and making the uncles who raised him proud. He needs help fulfilling his after-school duties with his siblings. Nobody can be in two places at once—not even Sammy!
An injury puts Cooper Hoskins in a tough spot—if he can’t work, the foster sister he’s raising can’t eat. But years in the foster system have left Cooper short on trust, and opening up to accept help isn’t easy.
Luckily, family intervenes—Cooper needs a job so he can care for Felicity, and Sammy needs someone who can see past his illness to the wonderful things he has planned for his life. Each heals the damaged places in the other’s heart. But falling in love is a big responsibility for young men deep in family already. Can the two of them get past their fear of the immediate future to see forever with each other?

Sammy is a young artist who attends musical classes in College, works as a teacher in a middle school and helps with his two siblings. He can’t run around town for his classes, work, and siblings, so he needs help, and besides, he also has a health condition that can be life-threatening if it’s not treated well.

Cooper was a foster kid, he’s on his own since he was seventeen, and he takes care of Felicity, his foster sister. He’s lonely and has to assume all the responsibilities for Felicity.
When Cooper’s injured while working on a construction site with his boss Brandon, Brandon decides to help him and introduces Cooper and Felicity to Sam’s family.

Cooper and Sam are at crossroads in their lives, at 21 years-old, they have to decide for their future, but there’s a difference between what they want and what they can have.

Stand by your Manny is book 3 of The Mannies’ series. I liked this book; it was a very sweet story to read.
Cooper has trust issues, which is understandable after the childhood he had. He’s very shy and careful, but he’s also very smart and strong. He wants to be loved; he wants to belong to a family, and he just wants to be accepted for himself. I really liked him; I found him so adorable and beautiful, I wanted to hug and hold him a lot.

Sammy is a brilliant young man. He’s smart and kind with a big heart. He tries his best to help his uncles who raised him with his younger brother and sister. When he meets Cooper, he wants more than a friendship with him; he wants everything. Sammy has a health condition—something minor but can be really dangerous without being properly treated, and Sammy forgets a lot his treatments because he just wants to be normal, be accepted without being seen as weak. That’s exactly what Cooper gives to him.

I had a sweet moment with them, it was my first book in this series, I didn’t read (yet) the two previous books, but this one can be read as a standalone.

You’ll have a sweet time with Sammy and Cooper.