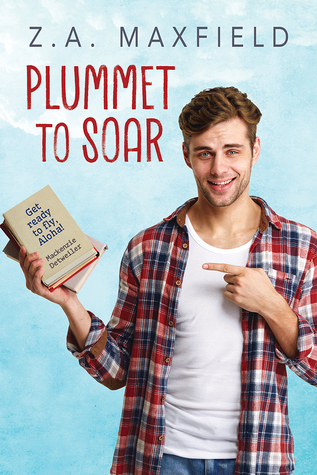 Feckless, luckless, and charming, Mackenzie Detweiler is the author of a self-help book one reviewer calls “the most misbegotten motivational tool since Mein Kampf.” He’s maneuvered himself into a career as a life coach, but more often than not, his advice is bad. Really bad.
It’s even getting people hurt… and Mackenzie sued.
It falls to Mackenzie’s long-suffering editor, JD Chambers, to deliver the bad news. He chooses to do so face-to-face—to see if the spark he senses between them is real when they’re together in the flesh. Unfortunately, a snowstorm, a case of nerves, a case of mistaken identity, and finally a murder get in the way of a potential enemies-to-lovers romance.
There are many, many people who have good reason to want Mackenzie dead. JD must find out which one is acting on it before it’s too late for both of them

Mackenzie wrote a self-help book, Plummet to Soar and became a kind of life-coach. But Mackenzie doesn’t give really good advice, and people get hurt, and he’s sued. He doesn’t know it yet, so he’s ready to give his seminar with his plumeteers in Wisconsin when they get caught up in a snowstorm.

JD is Mackenzie’s editor, and he decided to deliver the bad news face to face. After 2 years of a long relationship that was more than professional online, JD wants to meet Mackenzie and see if what they have online is the same in real life.
But nothing went well. JD didn’t reveal his identity at first, then a big snowstorm cut them from the outside world, and someone wants Mackenzie dead.

It’s the longest weekend of their lives with one goal, survive!
I liked this book, it was special at first, and I wasn’t sure I would understand everything. I was pretty sure that it was a sequel, but nope it wasn’t, and the more I read, the more I enjoyed and understood the story.
The plot is simple, a hotel lost in the middle of nowhere in a snowstorm. 8 people, 1 killer and a lot of unknown parameters, but one goal, survive and stop the killer, it’s a kind of a mix between Clue and Agatha Christie.

It’s not the typical romance when the 2 MCs meet and we follow how they fall in love. Here, JD and Mackenzie already know each other, they are already in love with each other, so when they met and JD reveals his identity, they acted like a couple who have been together for years. It was natural for them, and I liked it actually, it’s a change from the usual romance that I read, so I like this in the book.
The writing was good, dynamic, fresh and I can say very fast. We jump from scene to scene, and at first, it can be confusing but soon we get used to it, and it’s interesting, we haven’t time to get bored, not at all, it’s like being in a rollercoaster.

I liked it a lot. It was very refreshing and funny with scenes that were intense and funny with a real comic view of the situation. I won’t forget the scene in the police’s car… (aaaaaaand you want to know right! So read it, and you’ll find out).

I recommend this book; it’s a funny, dynamic and refreshing read.

One thought on “Review: “Plummet to Soar” by Z.A Maxfield”