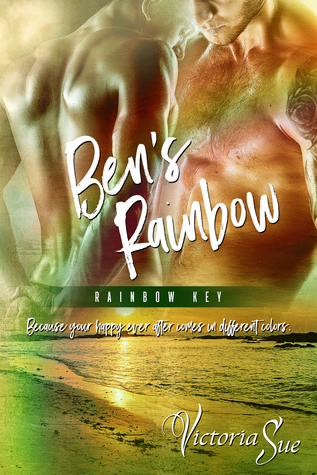 Benedict Keeler was one of America’s most popular models. Hot body, hot career, and super-hot boyfriend, until a devastating house fire destroyed his face and his dreams. After being told all his life that a pretty face is the measure of his worth, he can’t face another rejection and runs from his lover, eventually hiding out on Rainbow Key.
Zachary Jones, a highly sought after photographer—even if he would rather shoot the homeless in Manhattan than a fashion spread—is now facing the real possibility that a genetic disease will render him blind and his days behind a camera may be over.
Two devastated men, one haunted by his past and one convinced he has no future. Will they both hide from the world, or will they give love, and each other, a second chance?

Benedict Keller was one of the most popular models of his generation. He had everything, money, celebrity and a hot boyfriend who loved him more than anything. He had everything to be happy until a fire in a hotel room, and Ben had been burned, his face and body had been hurt and damaged…irrevocably. Ben disappeared off the face of the earth and took refuge in Rainbow Key.

Zachary Jones is a very talented photographer. He’s very engaged in the humanitarian cause and only takes model’s shoots for money and his beautiful boyfriend Ben. For 4 years, Zack throws himself into his work, forgetting himself since he lost his man. But when he loses his left eye because of a genetic disease and he’s risks losing his right eye, Zack is sent by his brother, to Rainbow Key hotel to recover.
Two broken men will have to face their past, their fear, and their regrets if they want to heal their two broken hearts.
Will a second chance be enough for their happy ending?

Ben’s Rainbow is book 3 of the Rainbow Key Series.
I loved this book, it’s, for now, my favorite of the series.
Ben always intrigued me, I wanted to know more about him, and I wasn’t disappointed.
Ben was a model, a successful model until a fire damaged his face and he ran away from everyone. He broke my heart but also pissed me off. At first, during my read, I was pissed at him because I didn’t understand why he ran away from Zack when he was hurt by the fire. But the more I read and the more Ben revealed himself, his past, his trauma and his fears, he broke my heart. Even when he acted stupidly (can’t tell you more) I was a little bit upset, but not pissed because in a way I understood him better.

Zack got my heart completely. He was so in love with Ben, so devoted to him, and he was devastated by his disappearance. He moved earth and sky to find him, turned over every rock in every city to find the love of his life, and when he gave up, he lost his eye and threatened to become completely blind if he didn’t treat the other. I was broken for him, devastated for him, and I was outraged for him. But when he had the chance to be happy again with Ben, he didn’t hold back, didn’t run, he just embraced this chance, completely and totally. This guy is fabulous, and he’s my new obsession (until the next book of the author… I know I’m so easy).

I adored this book, I loved how the author wrote it. At first, it was easy to make Ben the bad guy in his relationship with Zack. But the author manages to give us information about Ben’s past and why he acted like that. She did it bit by bit, like a striptease, the more we read, the more Ben and Zack reconnect, and the more Ben strips out his secrets in front of Zack and Us. I kind of re-fall in love with Ben at the same time Zack did. She makes the plot evolve with the characters and not the other way, and I loved it!

I also love the fact that the characters already know each other, already have a past, and a story. They have to reconnect to each other and to open their eyes (no pun intended) about their past and their mistakes. Zack is threatened of becoming completely blind but he’s never been as farseeing than now (pun totally intended here!).

The book can be read as a standalone, but I highly recommend to read the entire series, each book is completely different from the previous, and it’s another good point to start it.

5 OptimuMMs… Because I’m so team Zack and Ben