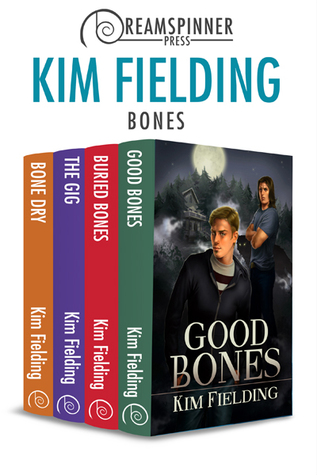 Skinny, quiet hipster Dylan Warner just wants to live a normal life—despite being a werewolf—but when he buys an isolated farmhouse, it comes with more adventure than he anticipated! In Good Bones, Dylan’s sexy neighbor Chris Nock helps Dylan renovate the house, but how can Dylan reveal his furry secret? In Buried Bones, a brand-new relationship is hard enough to handle, but the appearance of a ghost and Chris’s dad threaten to bring Dylan and Chris’s relationship toppling. In The Gig, a chance encounter introduces Dylan and Chris to Drew Clifton and Travis Miller of Speechless. In Bone Dry, artist Ery Phillips is house-sitting for Dylan and Chris when a strange—and beautiful—man appears by the pond and inspires his muse.

This my first official review of a bundle. When it comes to rating a bundle, there are so many things that the reviewer must keep in mind, and can be tricky more often than not. In my honest opinion, you can’t make an average value because that will not do right for some of the books of a bundle.

So, in this case, I’m going to rate the emotions that this bundle gave to me.

The first two books is about Dylan and Chris.

Wow guys, I really enjoyed this read mostly the first book.
A couple of years ago, Dylan was bitten by Andy, a former lover of his, and now at every full moon, Dylan turns into a very aggressive werewolf. He is an architect, so he’s secured his home as much as he could to keep himself trapped during his transformations. The hunger he’s experiencing is madding, and after every shift, he finds his place turned apart.
Then when he barely makes to home in one of the full moon evenings, with the help of his brother’s nudging, he decides to move somewhere out of the city but not so far for him that commuting would be a problem.
Dylan doesn’t know that his new house will come with a redneck neighbor, who is not only the nephew of the former owner, but also a handyman.
Things go pretty well at first. Dylan hires Chris and sparks fly. But Dylan’s past seemed to find him even in this remote part of the world.
Chris is thee opposite of what Dylan is. He’s not dumb, but his manners are raw, and he freely shares his opinion as he sees it. I love Chris’ no bs attitude.
Dylan finds the strength to fight his insecurites from Chris’ confidence when Chris hands all of himself to Dylan intimately.
Now I have to open a parenthesis to let you in on my opinion when it comes to power plays. It’s not very often I read a well-balanced book like this! I was washed away by the smooth change of power between these two. Dylan’s aggressiveness/insecurities and Chris’s confidence/strength/the ability to let go. The reading was so smooth that you don’t struggle with sudden changes in character behavior.

While in the first book we see these two become one, in the second book the past of both shows its head perturbing Dylan and Chris’s life together. We go more into the paranormal world, learning about new species in Kim’s world. The second book is followed by a short story, a story told not by our MC’s point of view.

And here comes the hard part. While I enjoyed the first three books of the series, this book was a struggle. A nix, a water spirit… guys it’s not my thing, so I don’t want to write much about it because I really can’t. For me, it’s a shallow read, like a very shallow read. So my rating doesn’t contain this book actually. And if it would be a separate read bought by me, it would be probably a DNF.

But that said guys, you need to read Dylan and Chris and even Ery’s and Karl’s story.