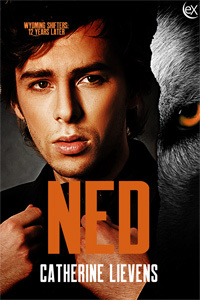 Sometimes the best thing in your life is the result of the worst thing that happened to you.
Ned is fleeing New York—and Paris, one of his one-night stands who can’t take no for an answer. He goes back home to Gillham, hoping Paris won’t find him, but not really believing it. The last thing he expected was to meet his mate. He’s only twenty-two, and he has a stalker. What is he going to do with a mate?
Luke didn’t think he had a mate until he met Ned. He was created in a petri dish and raised as a killer until the pack rescued him when he was seven, and he is neither human nor shifter. To add to his weirdness, he’s a virgin, and he’s not interested in sex.
Ned keeps Luke at arm’s length, especially after Paris manages to find him and threatens his best friend, Amy. It gets harder and harder to stay away from Luke, though, and Ned is torn between the need to be with his mate and the need to keep Luke safe.
Will Ned be able to find a compromise? Will Paris be stopped in time, or will he manage to separate Ned and Luke before they even get a chance to be together?

Ned is the second book in the Wyoming Shifters: 12 Years Later series by Catherine Lievens. I wanted to like this book because the blurb sounded good but unfortunately it wasn’t as good as the blurb or the first book in the series.

I was excited that Luke was one of the created paranormals that was rescued by the pack and is now living in Gillham and that he’s asexual and trying to figure out what to do with his life now that he isn’t an assassin anymore. I thought pairing him up with a promiscuous 22-year-old human mate would be interesting. However, it just didn’t work out.

Ned’s trying to escape a stalker, Paris, and returns home only to run into Luke and be told that he’s his mate. Ned isn’t interested in a mate and initially rejects Luke. But the mating bond keeps working its magic, and they eventually start trying to have a relationship. Yeah, that doesn’t work out too well for them. They both have a lot of self-doubt and self-esteem issues which they have to get over.
I also thought it was a missed opportunity that the author doesn’t use any of Luke’s talents or abilities that he was bred and trained for to help with the stalker issue that Ned has and Ned is unwilling to involve Luke in his problems. But isn’t that what mates are for to help each other when they have problems? I felt this was a missed opportunity and the book, unfortunately, revolves mostly around their internal insecurities.

There is also the problem of how the author deals with putting an asexual person with a promiscuous person. I had a hard time believing that a 22-year-old who’s used to having lots of sex would be okay with only having sex once in a while or not at all. I did like that Luke was willing to explore his sexuality to find out where he is on the asexual scale. Instead of just refusing to do anything sexual because he didn’t have a normal sex drive. So I did like that part of the book even if it was hard to believe that Ned would be okay with limited amounts of sex to fulfill his needs.

There were other parts of the book that made me go awe and had some cute scenes, but it just wasn’t as good as the first book.