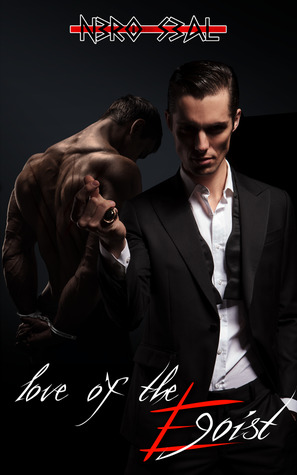 “I wanted to play with you… punish you. But now, I want to ruin your world and turn it pitch black. Isolate you so you don’t have anything left except me.
And remember, it’s your own fault.”
* * *
Isolation. Loneliness. Endless silence stretching into eternity.
This is the personal living hell of police detective, Kuon Leiris.
His punishment for ruining the Black Duke’s deal.
But when nights come, it gets worse…
Cruelty. Care. Brutality. Affection.
Constant mind games where he can do nothing, but give in.
Yugo pours his every corrupt desire into his prey, testing the limits of their twisted relationship.
Do you dare enter a dark world where safe-words don’t exist?

Love of the Egoist is the first book in the Egoist series and is the second book that I’ve read by Nero Seal. I have also read And After Death…. Love of the Egoist is well written, the editing was good, but I did find some mistakes, but they weren’t bad enough to interrupt my reading of the book. I did like the warning at the front of the book, and I don’t know if I distanced my emotions too much or what, but I had a hard time feeling the emotions from the police detective, Kuon Leiris, who’s captured as punishment for ruining the Black Duke’s deal. I think I might have had a better time feeling his emotions or caring about what he was going through if I’d gotten emotionally invested in him before he got captured by Yugo “The Black Duke.”

The book starts out and Police Detective Kuon immediately gets captured and then we get snippets of his history. It wasn’t enough for me to become invested in him. I found myself more emotionally connected to Yugo and his mixed feelings as he tries to bend but not break Kuon into the type of possession/toy that he wants him to be. It wasn’t until the introduction of Milo that I finally started to connect with Kuon’s feelings and then the book ends in a cliffhanger, and we’re left hanging so now I want to read the next book in the series to find out what happened. Is Kuon still alive or not? I hate having to wait to find out. But I’ll be reading the next book to find out.

I did love one of the scenes between Yugo and Kuon when they’re in the bathroom, and Yugo wants to aim Kuon’s willy while he’s going to the bathroom. Kuon’s having a little bit of stage fright and can’t get his flow going and Yugo ends up talking in baby talk to Kuon’s willy, and that makes Kuon bust up laughing, and he finally gets his flow going much to Yugo’s dismay since it ends up going everywhere. I busted out laughing, and the memory still has the ability to make me chuckle. I’m so glad that my sister didn’t ask me what was so funny since we had our young niece and nephew over at the time and I wouldn’t have been able to explain it. But it was a great break in all of the dark inner thoughts, obsession, and sex scenes that had been building up through the story until that point. It then went back to their confused feelings for each other. Overall, it wasn’t a bad book about Stockholm syndrome and if you like books about Stockholm syndrome, abuse, brainwashing, isolation, rape, hurt/comfort, enemies to lovers, mafia, and police detectives then this book is for you.