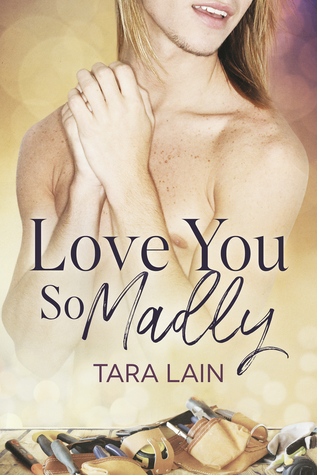 Ben Shane has it all… and he’d like to give some of it back. While he loves his job heading a foundation that funds worthy causes around the world, his engagement to one of America’s wealthiest men leaves him feeling more like a trophy wife than a valued partner. The first warning that his relationship might not be designed to last is his irresistible lust for Dusty Kincaid, the golden-haired, bright-eyed handyman for his company.
Though Dusty is odd for a twenty-three-year-old—no liquor, no sugar, and he can’t even drive—the more Ben gets to know Dusty, the more he admires him. But is Ben going to give up a guy who drives a Ferrari for one who takes the bus? He must be mad. Dusty knows he and Ben can never work.
After all, Ben’s perfect… and Dusty isn’t. But Ben might surprise everyone with proof that he’s only madly in love.

Love You So Madly is the second book in the Love You So series by Tara Lain. This book was just as cute as the first book in the series, Love You So Hard. And for another couple of hours, I was transported to the world that the author has created instead of sleeping like I should have been doing. But I regret nothing. Sleeping is overrated anyway, and I would much rather be reading a good book. And I know that I will always get a good book when I read a Tara Lain book. Her books are well written, nicely edited, have a great flow to them, and have loveable characters.

Ben loves his job and getting to give back through his job as head of the foundation. He’s also fortunate to have a rich fiancé. His fiancé Alan is from a very wealthy family, and Ben is excited about the networking possibilities for his foundation. And he sees that benefit during his engagement party. However, his relationship with Alan isn’t going as good as he would have hoped. They both seem to want something different out of their relationship. Alan doesn’t see the reason for Ben to continue to work as much as he does or at all.

Alan’s looking for somebody to explore the world with and that just isn’t how Ben sees his life going. He loves to work, he loves the new house that he’s having renovated, and he can’t see himself being a kept husband. That just isn’t him. Also, there just doesn’t seem to be a whole lot of chemistry between him and Alan. And that isn’t as apparent as when he finds himself lusting for Dusty, the handyman that works at ClearWater with him. Ben will have to decide what he wants to do. Go with what his head is telling him to do or go with what his heart is telling him to do. Will he lose the rich people that want to invest in his foundation if he isn’t engaged to Alan anymore? But he can’t deny how much he wants to get to know Dusty better, and so he hires Dusty to supervise the renovations that are being done on his house while he isn’t available to be there. As they get to know each other better, Ben finds himself even more torn. But something about Dusty seems off, and he can’t figure out what it is.

Dusty is a twenty-three-year-old college student that lives at home with his mom and works for multiple companies. One of the companies is ClearWater Technologies where he has a crush on Ben. But Dusty knows that Ben is way out of his league. Dusty has epilepsy and has since his childhood but through healthy eating and getting plenty of rest he hasn’t had an episode in almost a year. Due to epilepsy, Dusty isn’t allowed to use power tools or drive a car. But he’s well versed in using public transportation. Dusty also doesn’t let his epilepsy dictate what he can do with his life, and he doesn’t allow his mom to either. The highlight of his day is getting to see Ben, and when Ben asks him to supervise the worker renovating his house, he is on cloud 9. Dusty loves Ben’s house and can see why Ben loves it also. It matches Ben’s personality perfectly. It even has a guest cottage on the property. But Ben has a fiancé and Dusty, even though he hasn’t told anybody that he has epilepsy, knows that he doesn’t stand a chance against his wealthy fiancé.

I liked this story. I loved Dusty. He’s such a free spirit, always happy and energetic. And he compliments Ben so much better than Alan does. He has goals and wants to see his mom in a better house than the one that they’re living in, and he doesn’t stop working on his goals just because of his epilepsy.

I liked Ben also. He has a lot on his plate, but I like that he gets his relationships straightened out instead of cheating on Alan. I liked how Ben and Dusty interact together, and their chemistry is hot. You can definitely feel that they are meant to be together. A much better fit than Alan and Ben.
I also liked that this story is told from both Ben and Dusty’s POV, and I liked getting to see more of Craig and Jesse from the first book also.

Overall, another great book from Tara Lain. I can’t wait to see what she comes up with next.

2 thoughts on “Review: “Love You So Madly” by Tara Lain”