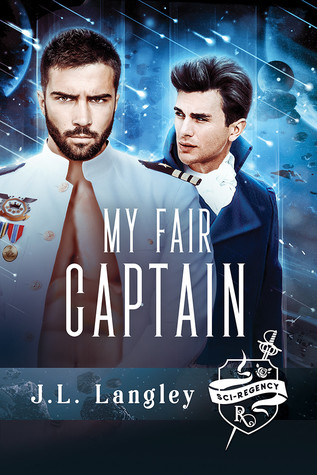 When Intergalactic Navy Captain Nathaniel Hawkins goes undercover to investigate the theft of an IN weapons stash, the mission raises painful memories from his past. Using a title he fled nearly two decades earlier, Nate once again becomes the Earl of Deverell, heir to the Duke of Hawthorne, in order to navigate the ins and outs of a Regency world. But planet Regelence—where young lords are supposed to remain pure until marriage—has a few surprises for Nate, not least of which is his attraction to Prince Aiden.
A talented artist, Prince Aiden Townsend isn’t interested in politics and the machinations of society gentlemen, and he adamantly rejects the idea of marriage and a consort. Aiden wants the freedom to pursue his art and determine his own future. But the arrival of the dashing and mysterious Deverell awakens feelings of passion and longing the young prince can’t deny.
As Nate uncovers a conspiracy reaching far beyond the stolen weapons, his future is irrevocably altered by the temptations of a life he never thought he could have. Drawn into the web of intrigue, Aiden is in danger of losing his life… and his heart.
First Edition published by Samhain Publishing Ltd., June 2007

I have to start by telling you that this is one of my favorite series. This was the second time I had the pleasure to read this first installment of the series.

My first time was not so long after I discovered MM. Still fighting to accept myself, these books helped me more in the process. I always loved Regency romances, me being a hopeless (full) romantic by heart. So this combined with the Sci-Fi genre—that’s another genre I like so much—was a win-win-win situation.

In this world, Regelence is a Regency society where the virtue of the young lords is protected. (Back when I was reading MF only, never even imagined the existence of MM, I always wondered why men’s virtue was value as less. Why only young girls, even now, virtue is so precious while young boys are “forced” to engage in those activities when they lose their purity at a fragile age. (Ok, ok, I may be a bit of conservative here … but just bear with me). Loving these two genera combination, I was very easily lost in the first book.

Nate is the captain of Lady Anna, a war battle spaceship, and he’s instructed to go to Regelence to investigate some missing armory. His admiral asked him to use his title as the heir of Earl, a title he resigned from years back when after a duel he was forced to leave his planet and his family behind joining IN. Now he’s a guest of King Steven, his Consort, and their five sons. Nate brings his adopted fifteen-year-old son with him, Trouble. You have to love this brat!

Aiden is an artist. He’s rarely aware of his surroundings when he’s lost in his art. Being a prince and having responsibilities was never a pleasure of his or his brothers. They always try to find a way to get some free time from the countless balls, the endless string of young men courting them, and the ever-present chaperone. Aidan’s virgin, but the idea that one day he will have to have a consort, a consort who will rule his life, let’s just say is not a thing he desires. Until he meets Nate. His body starts to behave in unbelievable manners, manners that are not fitted to a young prince.

I must say I love this series!!!! I already know the outcome because I’d read it before, but I can’t wait for book two! I’m itching to take book two and read it, but I promised myself to not do that until Dreamspinner Press publishes the sequel to this series.

I highly, very highly recommend to all of you!