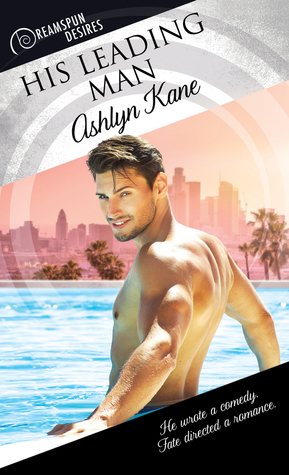 He wrote a comedy. Fate directed a romance.
Drew Beaumont is bored of the same old roles: action hero, supervillain, romantic lead. He’s not going to let a fresh gay buddy comedy languish just because they can’t find him the right costar. No, Drew bats his eyelashes and convinces everyone that the movie’s writer should play Drew’s not-so-straight man.
Aspiring writer Steve Sopol has never had a screenplay optioned. Now one of Hollywood’s hottest properties wants to be in a movie Steve hasn’t finished writing—and he wants Steve as his costar. Turns out the chemistry between them is undeniable—on and offscreen.
Drew swore off dating in the biz, but Steve is the whole package: sharp, funny, humble, and cute. For Steve, though, giving in to the movie magic means the end of the privacy he cherishes. Will the credits roll before their ride into the sunset?

Drew Beaumont is a famous actor in Hollywood, but he’s bored. He always plays the same roles, super villain, action hero or romantic lead. When he reads the script of an unknown writer, a gay buddy comedy, Drew knows this movie and the role of Scotty are for him, but he can’t find the right co-star, until he meets the writer, Steve Sopol.

Steve has wanted to be a writer since he was six years-old, and when his friend, Hillary (Drew’s agent) told him that Drew Beaumont, THE Drew Beaumont wants to play in his movie, Steve can’t believe it. While they search the co-star, Steve shows that he’s more than a writer. When Drew asks him to be his co-star, Steve sees the opportunity to make his movie right.

They didn’t expect to be as in tune on screen as in life.

I loved this book from the beginning; it was a super sweet romance.
Drew and Steve are good to each other. They don’t play games, they don’t cheat, they are just them, and they are good.
Drew is an actor and a diva (it’s him who said that, not me). He refuses to date in the industry, with all the sharks who want to be known and recognized, he doesn’t want to be used for his name. But Drew without, acknowledging it at first, wants a life-partner. He’s bi and out, he doesn’t live in a closet, but he’s solitary nonetheless. I like him a lot. He’s natural, simple (as simple as a diva can be) and funny.

Steve is shy, he values his privacy and wants to be known for his talent, not for his sex life. Dating Drew, implies for him that he’s going to have to give up on his privacy, but Steve isn’t as clueless about Hollywood’s way of life as Drew thinks. I adore Steve. I adore his simplicity and his sensitivity. He’s funny and very smart. He’s honest, what we see is what we have.
The book was very good, and the plot interesting. All the book is about Drew and Steve on set, and in life. On set as Scotty and Morgan, and in life as Drew and Steve. The author includes some scenes from the movie and excerpts of the script brilliantly in the book. It was like reading the story in the story. It was brilliant and gives a good breath in the story.

Like I said, I had a good time with them, no angst, no drama, no hesitation, just two men falling in love and trying to make it work.
If you want a sweet romance to read, go for this one.

It’s 5 OptimuMMs for the actor and his leading man!

One thought on “Review: “His Leading Man” by Ashlyn Kane”