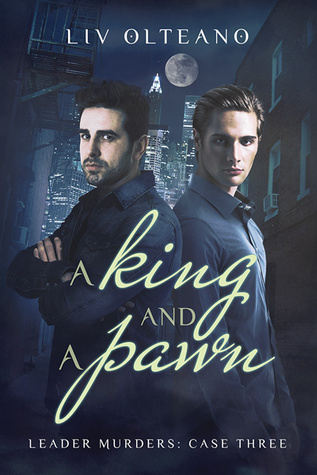 Bert Cooper’s life used to be great, until his sister turned out to be a traitor. Now Bert feels the whole pack looks on him with doubt and suspicion. To prove his loyalty, he volunteers to be the first ambassador at Fey Court, gathering information to finally solve the Leader Murders and punish those plotting against the Council and community. At least, that was the plan….
When Bert meets Sir William Matthew Sims, Court Interrogator, and one hell of a sexy man, life becomes a balancing act. And when the Fey King is assassinated, things become really messy.
Pack politics, fey politics, treason, suspicions of treason…. Bert has to choose between being ruled by his fears or standing up for what—and who—he believes in. And it might just break his heart.

We at OptimuMM, with the approval of Dreamspinner Press, decided that we will review some previously published books. Our first choice was Liv Olteano’s Leader Murders series.

This is the third installment of the series. I come to like this series so much, and I would be thrilled if this series will continue.
My resentment from the first book it’s totally gone by now. I love the characters, the setting, and this universe of Liv’s. The alphas are still assholes, but as we learned from the second book, maybe their behavior comes from their insecurities.

This book is the story of Bert, Weiss’ beta. We learn little about him in the previous books, but I was eager to get to know him.
Well, this book was a wonderful read.

Bert feels guilty for his sister’s behavior. He feels that not knowing Tricia’s plan all along, makes him not suitable for his role as a beta. These feelings push him to accept the role of the first ambassador in the Fey Court.

He knows that arriving there he could be killed on sight. But the need to prove himself to Weiss is even higher. Going into fey territory is his last chance to prove himself. Or is this what he thinks.

Will Sims is the Interrogator of the Fey Court. That means there is no one with stronger magical power than him. Except the combination of magic of the High Council. Will is present as Bert’s driver then later on, he arranges for Bert to be close to him, as close as possible.
Bert is cautious. His life is in danger, but he can’t really ignore the chemistry between him and Will. Will being the most powerful magic user, he can do anything, but Bert fears his heart. And when he learns about Will’s ulterior motives, the doubt takes root in his mind. A mind that is so confused about everything at that moment in his life.

I loved it! All of it! I couldn’t put it down. I loved Bert. His dedication to his emotions and everything about him. Will is a sweetheart, a strong man who knows what he wants. And he wants Bert. But will he be able to pass through Bert’s defense mechanisms and earn his trust and love? Khmm khmmm … of course not *wink-wink.