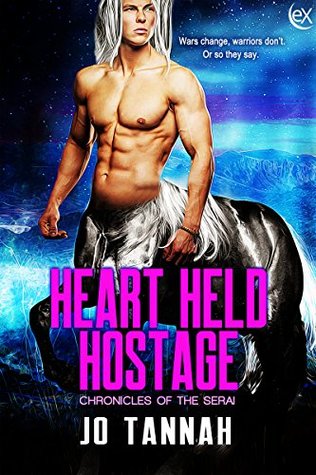 The Serai have won the galactic war. Tasked to take charge of the human assimilation into their herd, Prince Jytrerd never thought to find a mate among the human slaves. He learns that the human Captain Ian McCaskey is his potential breeder and saves his life. Because they are sterile, the Serai need the genetic materials their captives give to father their younglings. But Ian resists, and it doesn’t take long for Jytrerd to realize that for their relationship to flourish, the two of them must connect on a deeper level. It is now up to Jytrerd to make Ian understand that he is valued above all others.
Warning: this book contains m-preg.

Heart Held Hostage is the first book in the Chronicles of the Serai by Jo Tannah. I liked this book. I loved the cover of the book, and I will admit to wanting to read the book just because of the beautiful cover. What can I say, I like Centaurs, and after reading the blurb I decided to give it a try, and for the most part, I wasn’t disappointed.

There were a couple of things that the author needs to keep in mind when writing future books in the series. The size of the humans relative to the size of the Centaurs especially when the Centaurs are so much larger than the humans. How an equine body would move around a room, going upstairs, getting into and out of a bathtub, sitting down on furniture, stuff like that. A lot of the time, the author has the Centaurs moving around a room and doing basic things like taking a bath or sitting on a chair like a human would and that tended to pull me out of the story since I work with horses daily and know how they move and lie down so I know what situations would be feasible and what just wouldn’t work with their equine bodies.

I also wish that the story was told in a dual point of view. I think if we had Ian McCaskey’s POV that it would have made the book so much better and helped me feel the emotional connection between Prince Jytrerd and Ian.

I did like how Jo Tannah made the Centaurs her own and changed up where the male anatomy would be. Unlike a traditional Centaur where the male anatomy is the same as a male horse, these Centaurs have their male anatomy in a hidden pouch in the chest area of the horse where it ties in with the front legs. At least that’s what I got from the author’s description. I liked the idea that the Serai are sterile and that instead of killing off all of their enemies after a war that they test them to see if they would be useful as potential breeders or sex slaves. I wasn’t so keen on having the human woman with no weapon skills being the ones to dispatch the ones that aren’t chosen as breeders or slaves. I thought it was a little cruel. But it does fit with how the Centaurs are depicted at that point in the book, which is as a superior, arrogant, and cold race.

I did like how the story progresses and the relationship between Prince Jytrerd and his potential breeder Ian. It has its ups and downs, and Jytrerd will have to change the way he treats his mate and his other slaves if he is going to be truly happy.
I also loved Woll and Sebastian and Francis. I hope to see more of them in the next book in the series.

Overall, not a bad start to a new series and I liked it enough that I will read the next book when it comes out.