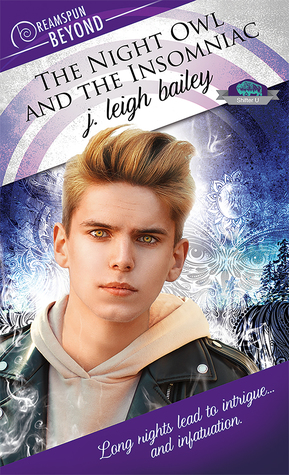 A Shifter U Tale
Long nights lead to intrigue… and infatuation.
Chronically ill with a mysterious condition, Yusuf “Joey” Franke escapes his smothering family and doctors by moving halfway across the country to enroll in Cody College. Not long after arriving on campus, some of his symptoms disappear, only to be replaced by debilitating insomnia. Joey spends his nights wandering the halls of his dormitory and hanging out with gregarious and affable Owen, who works the night shift.
When he suddenly shifts from a sick college kid to a massive Asiatic lion, Joey discovers another side to Cody College—it’s a haven for shifters like himself… and like Owen, a part-time great horned owl. And being a shifter is hereditary, which means his parents have some explaining to do.
When Joey and Owen investigate, they discover more than they bargained for—a family deception, a dangerous enemy with international connections, and a love that might be too new to survive the backlash.

The Night Owl and the Insomniac by J. Leigh Bailey is the third book in the Shifter U series and the twenty-third book in the Dreamspun Beyond series. I have read the other books in the Shifter U series, and this book while taking place at Cody College like the rest of the series, is a standalone book. There are cameos of Simon and Ford from the second book Chasing Thunderbird, but you do not need to have read the other books to understand what’s happening in this book. The Night Owl and the Insomniac is well written. I enjoyed the plot and that all of my questions were tied up by the end of the book. And I loved that Yusuf and Owen get their happy ending.

I like the attention to detail that the author gave to her characters. Both Yusuf and Owen’s characters fit the animal half of their personalities. Owen is a great horned owl and is both intelligent and extroverted. He loves to talk and also loves to mother hen people. Yusuf, on the other hand, is an Asiatic lion. Because of health conditions, he’s grown up isolated from society, which has resulted in him being introverted and socially awkward and figuring out his sexuality.

I really liked Yusuf “Joey” Franke. He has grown up being chronically ill with ever-changing symptoms, which has resulted in him being a Guinea pig for all kinds of test and treatments. Finally, fed up with it he escapes by enrolling in a college halfway across the country and moving there. Not long after arriving on campus, some of his symptoms disappear, only to be replaced by debilitating insomnia. With nothing else to do, he spends his nights wandering the halls of his dormitory and hanging out and playing chess with Owen, who works the night shift.

I also liked Owen. He was such a happy, upbeat person. Always including Joey in his activities like getting lunch with the guys and just hanging out. And forcing him to try new food combinations. I loved all of the little things he does each day to remind Joey that he’s thinking of him and there for him while they are apart. I also like how Owen has a grounding influence on Joey’s lion and is able to keep him calm and collected so that he doesn’t shift when he gets stressed. I liked how Owen was there for Joey when he shifted for the first time and helped him uncover his past to find the answers that he needs. I like how he complements Joey. They are just perfect together.
Overall, another great book in the Shifter U series and so far my favorite of the series. And another book in the Dreamspun Beyond series that hasn’t let me down. They are fast becoming a favorite of mine to review.