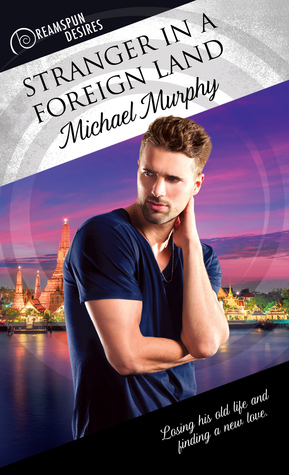 After an accident stole his memory, the only home American businessman Patrick knows is Bangkok. He recovers under the tender ministrations of Jack, an Australian ex-pat who works nights at a pineapple cannery. Together they search for clues to Patrick’s identity, but without success. Soon that forgotten past seems less and less important as Jack and Patrick—now known as Buddy—build a new life together.
But the past comes crashing in when Patrick’s brother travels to Thailand looking for him… and demands Patrick return to Los Angeles, away from Jack and the only world familiar to him. The attention also causes trouble for Jack, and to make their way back to each other, Patrick will need to find not only himself, but Jack as well, before everything is lost….

I really enjoyed the storyline of this novel. A man loses his memory but gains the love of a hot Aussie man? Sign me up! In the beginning, Patrick’s inner dialogue had me laughing out loud! I would love to have a book with that guy as the MC. Once he lost his memory, he didn’t really gain a personality. He just sort of existed which is a shame. The secondary characters were quite good. The little old Thai lady with the mean arm cracked me up. Definitely some entertaining moments.

Patrick is a businessman from California who frequently jet sets off to foreign countries. We never find out specifically what he does or did as an occupation. I enjoyed his entertaining dialogue throughout the flight and the disembarking process. Leaving the airport, he gets himself a cab with a shady driver and ends up in an accident that leaves him banged up and with no memory of who he is or anything in the past including the accident. He soon finds himself living in a bush outside of a pineapple factory where a friendly Australian comes to his aid.

Jack is such a sweet character. We sadly never get his backstory only that he’s an Australian and isn’t sure if he’s welcome back into his home country. He works at a pineapple factory and lives close by in a hut of sorts surrounded by the other plant workers. He’s a pretty lonely guy, and his sweetness just pulls at your heartstrings. One afternoon he hears his feisty Thai neighbor shouting at someone who’s in her yard and goes to investigate. What he finds is a good-looking man a little rough around the edges, and he’s decided he’s going to help him. I really enjoyed the friends-to-lovers aspect. It wouldn’t have seemed right any other way. It’s a relatively slow burn from there, but eventually, things do heat up so you will get your sexy time fix.

I wish we had more backstory for the characters. I would have loved to know more about Jack and his past. The storyline was interesting if not a little bland. Definitely a sweet romance. I’m looking forward to reading more from the Dreamspun series and this author.