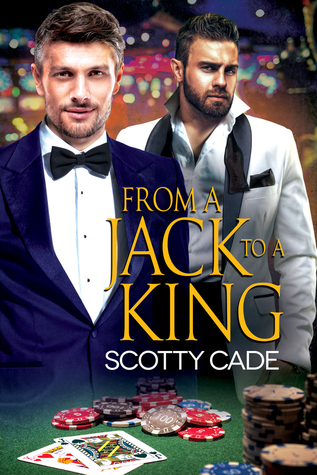 New York Times best-selling mystery writer Bay Whitman leads the life of a celebrity—at least on the surface. In public he’s self-assured and in control. Women hang on his every word, while men envy his confidence and swagger. But in reality, Bay is a loner. He’s shy and introverted, and his life consists of sitting in a dimly lit room writing his famous Jack Robbins mystery novels. His one vice—gambling. Winning an escort in a poker game will change Bay’s life in ways he never imagined.
Matthew “King” Slater is one of the hottest tickets in gay porn. He spends his days in front of the camera and his nights as a highly paid escort to the rich and famous. Deep down, he craves romance and a real connection, but his past makes it hard to separate the needs of his body from those of his heart. For now, it’s easier to think of sex as just a job. But while doing a shoot in Vegas, King is hired for a tryst at a famous hotel and casino, and his handsome client might blur the line between work and play.

From a Jack to a King is the first book I’ve read by Scotty Cade, and it won’t be my last.

I completely melted for Bay and King but not only for them. The author’s style was very good, dynamic and fresh, and the plot captivated me.

Bay had been bullied in his youth, and he wears the stigmata of this in his adult life. He lives almost as a recluse, shy and with a social life near to zero. His only passion is card games, poker especially, and he’s very good at it. But as a famous author, he has to do some “socialization” and promotions for his books, so he channels his inner Jack Robbins, his character, the one he created in his mind. Imagine his shock when Jack Robbins isn’t a fictional character, but a real man, a real hot man, who forces Bay to question everything in his life, starting with his sexuality. I totally adored Bay, he’s funny, very smart and adorable. I wanted to hug him when he was scared and high five him when he was confident.

King Slater is a porn star and an escort. He was also bullied in school when he was younger and had to deal with the aftermath of that in his adult life. He keeps a difference between his jobs and his real life. Being paid for sex is just a job for him, and he wants a real relationship, a real emotional romantic relationship. I loved King, I loved how strong he seems, how big and hot he is, but what I loved the most, it was his fragility. How behind the mountain of a man that he is, he hides the tall scrawny kid that he was.

The author wrote a good book, with an interesting plot. There’s two difficult topics in the background that the author didn’t develop much because it wasn’t the main plot, but whenever they were covered in the book, it was well done. The author took the time to research and respect it. It’s something that I appreciated, and I learned some things too.

I recommend this book, it was a good romance, a beautiful “straight-to-gay” book, which I enjoyed a lot, in addition, the sex was hooooooooot and very good.

4 OptimuMM’s for King and his Prince!