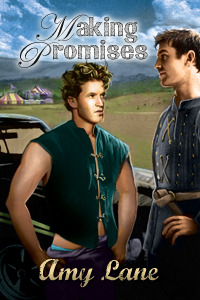 All Shane Perkins ever wanted to be was a hero. But after a career-shattering decision to go down fighting, Shane comes home from the hospital to four empty walls, a pile of money, and a burning desire for someone to miss him the next time he gets hurt in the line of duty. He ends up an officer in the small town of Levee Oaks, and, addicted to the promise of family, he makes an effort to reconcile with his flighty, troubled sister. Kimmy makes her living as a dancer, and her partner steals Shane’s breath at first sight. Mikhail Vasilyovitch Bayul dances like an angel, but his past is less than heavenly. Since he left Russia, he’s made only two promises: to stay off the streets and stay clean, and to take his mother someplace beautiful before she dies. Making promises to anybody else is completely out of the question-but then, Mikhail has never met anybody like Shane. Earnest, brave, and self-deprecating, Shane seems to speak Mikhail’s language, and no one is more surprised than Mikhail to find that keeping promises is Shane’s best talent of all.

I love this series!

This second book of the Promise Rock Series can be read as a standalone. We met Mikhail in book one, as Shane’s boyfriend, for a brief moment. That was kind of a spoiler, but I enjoyed this sequel anyway.

Shane is the new officer of Levee Oaks living with a hurtful past from L.A. He was betrayed by his boyfriend/colleague and also by his squad. Shane has a kind of hero complex. He likes to help and save the day.
His sweet nature is often misunderstood for a simpleton brute. He is a big man. Often he’s called ugly and fat. That leads to him being an introvert and a people pleaser.
When he’s visiting his tween sister, who is performing as a dancer in Renaissance Fair, his breath is taken away by the slender, gracious Mikhail. He stares at him silently from afar hoping to be noticed even though he knows that he has no chance with someone like Mikhail.

Mikhail is Russian with a brutal past. After his knee is injured, his dream of becoming a professional dancer is killed as well. He buries himself in auto destructive behavior, and when that is too much, his mother takes him to the US.
When fate brings Shane in his way, he takes it by his hand (literally). He spends a marvelous day with this amazing man, and he leaves him waiting for more. And then Shane does something awful…he makes promises to Mickey.

Guys, grab this series already if you didn’t do it before and read it.

The sweetness and shyness of these men is just adorable. The strength that lives within, the brotherhood and the dedication to each other is tear-jerking. I’m in love with this series…!