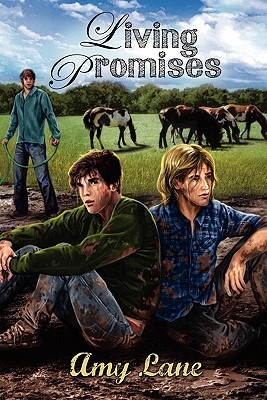 Six years ago, Jeff Beachum comforted a frightened teenager outside an HIV treatment clinic, and Collin Waters has remembered his kindness ever since. Now, after six years of crushing on the kind, brown-eyed sweetheart of his dreams, Collin is feeling adult and together enough to make his move. Too bad fate, which has never been kind to Jeff, has something else in mind.
Jeff’s life had fallen completely apart before that long-ago day, and it isn’t much better now. Jeff has toughened up, become self-reliant, been the funny guy his friends turn to, the one who gives advice and comfort when needed. But every phantom from Jeff’s past is about to come out to haunt him, and the family Jeff has staked his future on isn’t in such great shape either. Collin is more than a starry-eyed kid, and it’s a good thing, because Jeff’s going to need all the help he can get. No one knows better than Jeff that life can be too short to turn your back on honest love, and that living happily is the best promise of all.

As you know already, with the approval of Dreamspinner Press, we’re reviewing previously published books. We continue with Amy Lane‘s, Keeping Promise Rock contemporary romance series.
I love this series but this book …

This sequel of the series was not as good as I was hoping for. I loved Jeff from the very first moment we met him as Crick’s PA. He charmed me with his outgoing behavior, sassy attitude and strong personality.
But this book turned him into a “woman”. Without disrespecting the author or the series, this story turns out to be a false-stereotyping bottom=girl-in-the-relationship type of tail. From the strong personality, he becomes a sobbing, quivering damsel in distress. Maybe the author did it unconsciously, but as I read it, it annoyed me to hell.

Collin is 13 years younger and has a bad boy attitude. He’s had a 5-year crush on Jeff and when the opportunity comes he, finally, makes a move.

Jeff can’t get past the age difference, but in the end, he leans on Collin. Right. And this…!

I don’t know, maybe its just me being a man, maybe having the man-pride myself, but that doesn’t bode well with me. An over 37-year-old leaning on a 24-year-old boy, just not ok in my book. Jeff is strong, we all know that we all need a shoulder from time to time, but for a 24-year-old to have more manliness in him than a 37-year-old grown man who takes care of all his friends…well, that is a lack in his character. This wasn’t a first time when I read a series where a personality change happens to a character. For me, it’s just kind of ruins the book, if not the whole series.

Toward the end of the book, the story was repetitive. We read again and again about previous MC’s of the series. There are a lot of health issues going around. It seems that everyone gets sick at the same time. It was a bit depressing.

As much as I loved the previous books, this felt stretched.