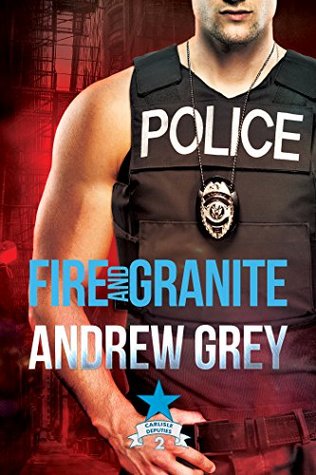 A Carlisle Deputies Novel
The heat is growing from the inside, but danger is building on the outside.
Judge Andrew Phillips runs a tight ship in his courtroom. He’s tough, and when he hands down a sentence, he expects to be obeyed. So when a fugitive named Harper escapes and threatens his life, Andrew isn’t keen on twenty-four/seven protection… especially not from Deputy Clay Brown. They have a past, one that could cause problems in their careers.
But with Clay assigned to Andrew and the two of them together every minute, there’s nowhere to hide from their attraction—or from the fact that there’s much more than chemistry blooming between them. As the threat intensifies, Clay knows he’ll do anything it takes to protect the people who are taking their places in his heart: Andrew and his young niece and nephew.

I enjoyed the author’s easy reading style and the pacing of the book. The book was nicely written and detailed. I also enjoyed the plot even though Judges aren’t my favorite profession. They’re right up there with lawyers. There seem to be some good ones, but most seem to be corrupt or lord their power over you.

I’m glad to say that the Judge in this book is one of the good ones, but that doesn’t mean that he’s a pushover in the courtroom. He has a reputation for being hard but fair which doesn’t make him the most loved by the criminals that he’s sentenced. When one of the criminals that he sentenced escapes and threatens his life, he will be put under twenty-four/seven protection. Which he isn’t keen about but it would be tolerable if it were any deputy except Deputy Clay Brown. They have a past, and neither is happy that they have to work together, but the longer they’re forced to be together, the more they realize that their first impressions of each other might have been wrong or not necessarily wrong but that they are different than their professional personas. Clay realizes that Judge Phillips does have a heart and a softer side that he doesn’t show to everybody. And Judge Phillips realizes the same thing about Clay.

I loved their chemistry and how they have their mother’s terrible cooking in common. I also loved how Andrew ends up being responsible for his niece and nephew after his sister is admitted to the hospital. I also liked the secondary characters and how they’re included in the book for a reason instead of being one-dimensional filler characters. I thought the author did a great job handling the subject of depression and how it affected a single mom with kids and her brother who will be their guardian until she gets better—if she gets better. I also liked that the escaped prisoner is Clay’s cousin. I don’t know if every family has that weird and messed up cousin or uncle but I know that my family does, so I could really relate to that.

Overall, another great book by Andrew Grey and a great addition to the series.