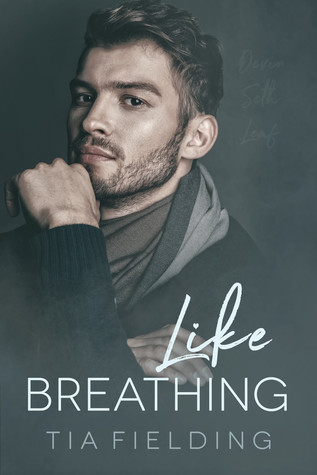 A love as easy as breathing.
Life started out rocky for Devin Rice, but it’s turned out pretty well. He has adoptive parents and a brother who love him, and he works as a coder for his dad’s video game company. Romance is scarce, but a chance encounter leads to more than he ever expected.
While dropping off an assignment for his sick brother, Dev meets his mentor. Art history professor Seth Kent is brilliant and gorgeous, just what Dev has been looking for. Except that he’s in a long-term committed relationship.
Seth’s partner, Leaf, is older and sees the world differently due to his unusual upbringing. To him, the clear attraction between Seth and Dev isn’t a problem, it’s an unexpected gift. After all, Leaf is often on the road, going wherever rescue dogs need rehabilitation.
When Leaf meets Dev, all the missing pieces fall into place, and three men from different worlds and at different points in life fill each other’s empty spaces. For them, building a future together is the most natural thing in the world. But their unconventional love causes waves in their careers and family dynamics, and each man has his own doubts and fears to overcome.

Like Breathing is the first book that I’ve read by Tia Fielding but it isn’t going to be the last. I liked her style of writing and attention to details, but I also liked that I felt like I was in the book and living each of her characters’ lives with them, sharing their happiness, joy, hurts, sorrow, loneliness and at times jealousy. Oh and can’t forget about all of the hot kinky scenes. Yep definitely going to be reading more books by this author if they are like this book. I love a book with a good Daddy kink to it but with three main characters that have different needs that isn’t the only kink that’s in this book. There’s also a nice gap in age between the main characters. I loved how they all fit together and filled the holes in that needed to be filled.

They really complimented each other. But adding another person to an already established and committed relationship isn’t without its problems and misunderstandings. Communication’s key in every relationship and even more so when there are more than two people.

I loved Devin Rice. He’s twenty-five, has anxiety issues, and writes code for his father’s gaming company. I loved how he interacts with Seth and Leaf. I also like the relationship that he has with his adoptive parents and his brother, Angel even if Angel has issues with Devin dating his mentor, Seth. Although I get it, Angel’s afraid that Devin will break-up Seth and his partner, Leaf and that it will affect the professional relationship between him and his mentor. But there were times that I wanted to smack him and tell him to get over his homophobic issues, although that one scene where the brother walks in on them all is priceless. And that’s just one scene out of many that you won’t want to miss.

I liked Seth. He’s an Art history professor that’s thirty-six. He’s a little bit of a perfectionist, and he’s in a long-term committed relationship with Leaf and has been for about ten years. He loves his partner, but Leaf is gone a lot of the time training problem dogs.

When he mentions to Leaf that it’s been over a year since they’ve had penetrative sex, he knows that something has to change. He doesn’t want to have to give his partner ultimatums, but he doesn’t want to be taken for granted also. When he meets Devin dropping off his sick brother’s paper and then later ends up having lunch with him, he’s surprised at how easy he is to talk to and how much fun it is to have somebody to talk to. They’re just friends but he can’t help that he thinks he’s attractive and they have chemistry.

I liked that Leaf is different than both Seth and Devin in how he was raised. He had an unusual upbringing, and it’s left him with a different view of relationships and monogamy. So when his partner, Seth, gushes about his protégé’s brother and how they had lunch and talked for a while, he can see how animated his partner is, and although Seth doesn’t seem to be aware of it, he can see how attracted Seth is to Devin and he’s happy about it. He thinks that Devin could be just what their relationship needs. Somebody to be with Seth when Leaf has to be gone, and it doesn’t hurt that after meeting Devin that Leaf likes him just as much as Seth. And the attraction seems to be mutual between all three of them. I also liked that Leaf is fifty and has salt-n-pepper hair and is attractive enough to make Devin drool.

All in all the book is fabulous and one that I will be rereading.