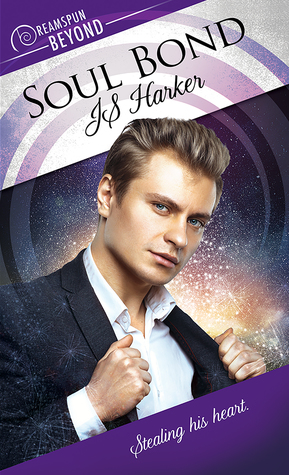 Stealing his heart.
As a thief and a warlock, Noah survives by using his wit and charm to prey on the privileged. His dangerous criminal boss wants an enchanted dagger belonging to a family of wealthy mages, including their pampered—but handsome—son, Ben. Failing to complete the job will be hazardous to Noah’s survival.
Noah bumps into Ben at a lavish party, and as soon as they meet, the connection’s undeniable, and it goes much further than ordinary attraction. Their bond reaches into their souls, entwining and changing their magic.
Which Noah thinks he can use to get to the dagger. After all, he isn’t sure this soul bond Ben seems so obsessed with is even real.
He also doesn’t count on being caught red-handed…. Or falling in love.

From looking the author, JS Harker, up on Amazon and Dreamspinner, Soul Bond looks to be the author’s first book. The book had promise. I did still enjoy reading it, but the author left me a little confused at the beginning of the book as she explained the differences between what made a mage and what made a warlock.

I’m still not sure if it’s just a money thing and whether you came from a mage house or it was a magic ability thing, like if you didn’t pass the magic test, then you became a warlock. The mages did seem to have all of the money, and the warlocks did seem to be poor but as far as I can tell they both had magic. So yeah even after rereading the first twenty percent of the book I was still confused.
What further confused me is that Ben is a mage and his father is their magus so you would assume that he would have some awesome magic ability and be stronger than a warlock. But when Noah needs his help, Ben is helpless to help him and all he can suggest is running away. Not what I would expect from a rich and powerful mage. So yeah a little disappointed in Ben’s character, especially since he’s been searching for so long to find his soul bond.

I did like Noah though. He stayed true to his character. He’s a thief that’s good at illusion spells and if that means using his soul bond to save his life that’s what he’s going to do. Will he feel guilty about it, sure, but he’ll still do it. However, he didn’t figure into his heist that he would fall in love with the head of the household’s son.

I did enjoy the middle portion of the book, and there was plenty of chemistry and hot scenes between Ben and Noah, but the end of the book ends more in a happy for now ending. And the author didn’t give any indication if this is going to be the start of a series and we’ll get the rest of the unanswered questions answered in the next book or if we’re just going to be left hanging to draw our own conclusions.
I wish authors would give some indication at the end of their books. Something as easy as “The end for now” or “To be continued” or even a “Stay tuned to find out what happens to Ben and Noah in the next book.” If for no other reason than it would give their books better review ratings. Readers don’t like guessing or wondering if another book is going to come out. Letting us know that another book is coming to answer our questions will leave us feeling excited and anxious to read it versus disappointed that the book just ended and left us with questions that need answers.

I’m personally hoping that another book is made about Ben and Noah and that I get my questions answered. By the end of the book, I really liked them as a couple, but they have so much left of their relationship and journey to figure out.

Overall, not a bad book but it could have been done a little better. However, I haven’t given up on the Dreamspun Beyond series just yet and eagerly await the next book in the series.