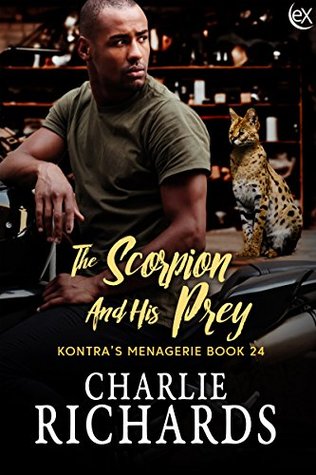 Rusty Peruke works as a mechanic and is close with his family. His wheelchair bound brother, Korvyn, lives with him, and he sends extra cash home to his parents on a regular basis. When he meets Acheron while the man is at the shop buying a set of fast wheels, Rusty is both excited and concerned—and it’s not because he’s never been with a guy. Acheron is a loner scorpion shifter who hasn’t stayed in one place since he left his family home over eight decades before. Rusty has no intention of running out on his family. To him, their needs come first. Can two polar opposites find enough common ground to build a future? Or will assumptions and miscommunications create a wall between them that’s impossible to scale?

Rusty is a mechanic who works hard to help his family and takes care of his brother Korvyn who’s in a wheelchair. Rusty is also a werecat who doesn’t have a pride, but family is important for him.

Archeron is an emperor scorpion who hasn’t had any contact with his family for the last century. He’s a loner and used to traveling a lot.
Rusty and Archeron are fated mates, and concession will have to be made.

The Scorpion and his Prey is book 24 of the Kontra’s Menagerie series by Charlie Richards.

This book can be read as a standalone. I hadn’t read the previous 23 books, but I didn’t have any difficulty following the story.
Archeron is an emperor Scorpion, so he’s smaller than his mate Rusty and looks like a twink, but Archeron is a very powerful and dominant shifter. I liked Archeron. He’s confident, dominant, sexy and very protective of Rusty.

Rusty is a quiet serval cat, and his family is very important to him. Rusty is also shy and less dominant than his mate. I liked him, and I found him very sweet.
I liked the difference between them, how Archeron, who looks like a little twink with a smaller animal, is in fact, more dangerous and dominant than Rusty.

It was a short-read but pleasurable, and I enjoyed it.
It’s a sweet snack-book like I call it. Meaning, you can read it while waiting for your appointment at the dentist for example, or while boarding for your plane, it will make the wait more pleasant.

3.5 OptimuMM’s for The Scorpion and his Kitty!