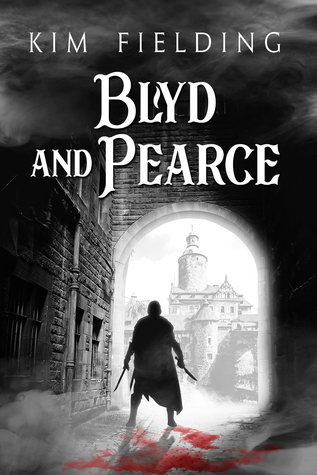 Born into poverty and orphaned young, Daveth Blyd had one chance for success when his fighting prowess earned him a place in the Tangye city guard—a place he lost to false accusations of theft. Now he scrapes out a living searching for wayward spouses and missing children. When a nobleman offers him a small fortune to find an entertainer who’s stolen a ring, Daveth takes the case.
While Jory Pearce may or may not be a thief, he certainly can’t be trusted. But, enchanted by Jory’s beauty and haunting voice, Daveth soon finds himself caught in the middle of a conspiracy. As he searches desperately for answers, he realizes that he’s also falling for Jory. The two men face river wraiths, assassins, a necromancer, and a talking head that could be Daveth’s salvation on their quest for the truth. But with everyone’s integrity in question and Death eager to dance, Daveth will need more than sorcery to survive.

Kim Fielding is one of my favorite authors. She has a way with words that is absolutely unique. With her previous writing that I enjoyed it captured my attention from the very beginning. This book didn’t quite get me as enthralled. It started off fine, but then the story started to kind of lag. Her description of the time period and the world around the characters were very detailed, and I didn’t have a hard time following the story even with as much detail as she uses. The characters were quite intriguing even the secondary ones. She definitely does her research and puts an immense amount of time and effort into her stories.

Daveth Blyth is from the impoverished side of town known as the Low Quarter. He was orphaned young but was determined to get out of the Low and make something of himself. Because of his talent as a swordsman, he was able to join the ranks of the royal guard. We soon learn that he was relieved of his duties because he was accused of theft. Instead of facing death, his Captain Myghal Tren has him spared. I’m not sure how I feel about Daveth. He just seems like he’s given up. He doesn’t fight the accusations against him, and he just sort of ghosts through life. As a character, he’s alright. I would have liked to see a little more passion and fire from him instead of so much woe is me.

Jory Pearce was definitely an interesting character. He was mysterious and pretty likable from the beginning. He was born nobility, but somewhere down the line, his parents had disowned him. I felt bad for his character. He does what he has to in order to survive, and sometimes that means doing things he isn’t proud of. I like how he isn’t a pushover and doesn’t just cower when Daveth shows up to interrogate him and fulfill the deal he made to a Lord. Jory is in some trouble as he gets caught up in a crazy spiral of conspiracies.

It all unwinds slowly in the beginning. It took some patience to not just skim through to find out what was really going on and where the book was eventually going. That’s also why I like Kim Fielding. If you can just have a little bit of patience and follow her creative mind through the book, you’ll never be disappointed. I definitely was not disappointed in this book. It just lagged far too much for me. I wanted more from the characters and plot and not so much filler.

I do recommend this book and other work done by Kim Fielding. Brute was absolutely fabulous. A definite must-read.