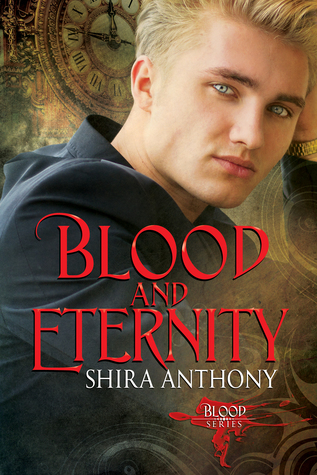 Sequel to Blood and Ghosts and the final installment in the Blood Trilogy
Vampire hunter Adrien Gilbert never dreamed he’d fall for his prey or that his love, Nicolas Lambert, would give him the gift of immortality. But when a hunter bent on destroying the truce between vampires and hunters throws the gauntlet at Adrien’s feet, Adrien must travel through time to save Nicolas, and with him, the entire vampire race.
The time has come to make a choice—one they will live with for eternity.
In this final installment in the Blood Trilogy, Adrien and Nicolas must face their greatest enemy in a deadly last confrontation. But to prevail, they’ll need to master the enemies within.
When Adrien awakens to a future he doesn’t recognize, he faces an impossible decision: live a perfect life with Nicolas in a shattered world, or risk everything to repair a broken past. But before he can challenge vampire hunter Verel Pelletier, he must master the demon who lives in his own mind—and learn to control his ability to travel through time. With Nicolas by his side, he prepares for a final battle against a powerful adversary who likes to play games with the past and future.
But the price of ensuring a future for their loved ones may be an eternity spent alone.

This is the third and final book in the Blood series. I was so excited about this book because I needed these guys to win. From book one there has been so much heartache, and the characters have faced so much adversity. The plot has remained fast-paced and extremely entertaining. The author has done an amazing job keeping me on my toes. I can never predict what’s going to happen next. She created this world where I finally start to get comfortable and then flips it upside down. Paranormal is never an easy genre to write especially when creating your own worlds, but Anthony does a flawless job. Throw in her incredible ability to add in some time travel, and I’m beyond impressed.

Adrien is an extremely complex character. Throughout the series, he has grown so much as a character. He started as a boy losing his mother and holding the entire vampire race responsible for falling in love with a vampire elder. In book three, Adrien has these incredible powers that he just needs to trust himself enough to reach their true potential. Time travel is a big part of this book. He has to go back to right the wrongs not only caused by him but also caused by his enemy vampire hunter Verel Pelletier. And of course that’s not enough for this fantastical author! She has to throw in Adrien’s inner demon as well. Every hunter has an inner demon that possesses the hunter’s true power. Adrien can either control it or kill it. Either way, he’s got a fight on his hands. He has to fight his inner demon, fight to save Nicolas and the entire vampire race, and of course he must fight the ever-powerful vampire hunter Pelletier. He’s got quite the full plate.
Nicolas is sort of a background character throughout these books. He’s not quite a main character, and he’s not quite a secondary character. He just kind of hangs in the shadows.

After book one, we really don’t see much of him the way we knew him in book one. He’s always changing and evolving as the hunters, including his love, constantly change up the storyline. As soon as we think this is it, this is where Nicolas comes out and kicks butt, he’s thrown to the sidelines. I always wanted more from him. He’s supposed to be this insanely powerful vampire, but he’s never really allowed to shine. Not my favorite main character. He definitely brought the heat when things got horizontal between him and Adrien, and I loved his loyalty and humble nature. I just wanted more of his badass vampire side as well. He was a little too submissive.

I highly recommend this series. There are not a lot of vampire romances in the MM genre so to find one this page-turning is obviously rare. I would not recommend reading these books as a standalone. They should really be read in order. Book one is very mind-numbing at times only because there is so much information being thrown out. Just don’t give up because it will all make sense as you make your way through the series. Book two is very fast-paced, and with it having time travel and flashbacks, you must pay attention or you’ll get lost in the pages.
Book three was incredible. Anthony did a fabulous job piecing everything together and I left the series extremely satisfied. The plot and characters are one of a kind, and I will definitely be adding this to my must reread list.