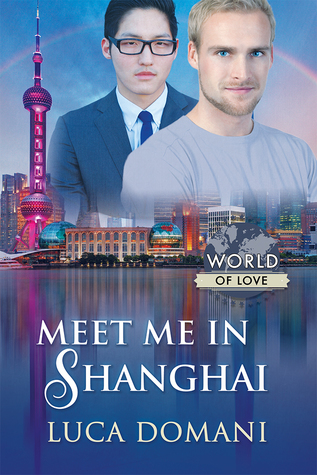 What are the odds of meeting your perfect match in a city of twenty-four million people—halfway around the world?
Software engineer Jeff has never set foot outside North America when his company sends him to Shanghai. It’s daunting to say the least, and Jeff is soon lost. He’s rescued by Chinese American banker Greg—a man who immediately sparks Jeff’s desire. But in a city so large and chaotic, what are the chances that they’ll bump into each other again?
When they do, a vigorous friendship forms despite Greg’s devotion to his high-powered—and high-stress—career. Both men want more, but Greg never takes things further, and Jeff’s time in China is running out. Soon he has only one night left. Will it be a last night together as friends… or the beginning of something that can last despite the distance between them?

This book is part of Dreamspinner Press’s World of Love series. It’s a short Contemporary romance that takes place in Shanghai, China. It is written from one character’s point of view. I’ve never read any books from this series, so I didn’t know what to expect. I wasn’t very moved by it. The storyline was good. I really did love all the descriptions as the characters explored the city. The problem I had most with the story was the characters.

Jeff is heading to Shanghai, China for his job. He’s never left the US before, and his coworker that was set to accompany him backed out at the last minute. When he arrives in Shanghai, he’s definitely way out of his depth. He has a crazy taxi ride on his way to the hotel that I could definitely relate too. His first day heading to his temporary office, he gets turned around. Luckily, he’s saved by a fellow American, and businessman Greg. Jeff is a very complicated character. I really liked him until he met Greg. Jeff is only in Shanghai for two weeks, and as soon as he meets Greg, he becomes a love-struck teenager. He was extremely difficult to read at times.

Greg is a businessman from California who has been living in Shanghai for the past ten years. He knows he works too much, and relationships are pretty nonexistent. His parents have put a lot of pressure on him to settle down and have a family. He hasn’t come out to them in fear of their reaction. He runs into a fellow American when the man seems lost. He sets the man on the right course. There wasn’t much depth to Greg as a character. He was more like a secondary character instead of a main character.

This book was a short, so I understand that there’s only so much depth an author to dive into. However, this book focused more on the descriptions and the life happening around the main characters than what was actually going on with the characters as a whole.

I would really like to read some of this author’s more extensive work.