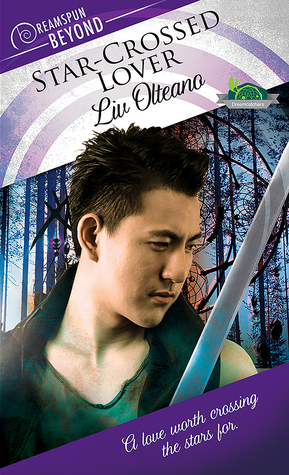 A Dreamcatchers Tale
A love worth crossing the stars for.
Taka has been a dreamcatcher and part of Team 32 for over six decades, but nobody has tempted him like Ginger—a dancer at club Zee. Too bad dreamcatchers aren’t allowed to have meaningful relationships with regular people. His willpower proves a finite resource, though, when a mission at the club means spending much more time around Ginger.
Ginger’s infatuation with Taka is unwavering. When he proves to have some paranormal skills of his own, he earns himself a place on the team—if he wants it. His decision will change his life—not to mention Taka’s—irrevocably.
But living in the now could prove an issue for a man who has as much history as Taka. Can Ginger’s determination help him make his way into Taka’s heart?

This is the first book that I’ve read by Liv Olteano, and it was okay. I liked the characters, but the plot was a little confusing and messy. And it might have been that I was just missing what had happened in the first book and some of the background details that might have been explained but another of the OptimuMM reviewers reviewed the first book in the series and also had a problem with the plot being confusing and messy. So it just might be the author’s writing style. The plot was good though. I did like the storyline, and I do want to find out what happens next, so I’m going to read the next book when it comes out. My favorite parts of the book were when Taka and Ginger were interacting and when it was explained how they were star-crossed lovers. I kind of wish that they had explained more about their past lives’ struggles and what kept them apart until now. The editing of the book could have been better, but as it was an ARC copy, I’m hoping that they got caught and fixed.

Taka has been part of Team 32 and a dreamcatcher for over six decades, but nobody has tempted him like the dancer at club Zee. It’s too bad that dreamcatchers aren’t allowed to have meaningful relationships with regular people. But that doesn’t stop him from going to the club on his downtime and watching Ginger. His willpower will be put to the test, though, when a mission at the club means spending a lot of time around Ginger. I liked Taka. He was strong, courageous, and protective.

I liked Ginger more than Taka. Taka maybe older than Ginger but it’s Ginger that ends up taking the lead in their relationship, which just confuses Taka because he thinks he should be the more experienced one in the relationship since he’s older. I also liked how unwavering Ginger’s infatuation for Taka is. He’s been flirting with him since he started working for the club about a year ago. When it comes to light that Ginger is from a line of witches and that he would be a good candidate for being a dreamcatcher, I was so excited for Taka since he can now follow his desires and date Ginger.

I also liked how they go on missions and fight the spagas (demons) who suck the lifeforce out of their victims while they are sleeping.
At the end of the book was an exclusive excerpt for the next book in the series Lover Behind Enemy Lines which is going to be about Claw and their captive Nathan Gallagher. I can’t wait to read it.

One thought on “Review: “Star-Crossed Lover” by Liv Olteano”