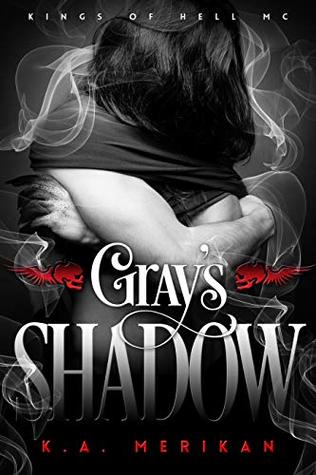 — There can be no shadow without the man to cast it. —
Gray. Lost his twin. Will never be complete. Works alone.
Shadow. Monster? Human? Exists to be Gray’s one true companion.
After losing his twin brother, Gray has devoted his life to the Kings of Hell MC. He will do anything to protect his family and that means anything.
Even sell his own shadow to the devil.
Following a fire that left him without one arm, Gray feels pushed to the sidelines. In order to prove to his club that he is still capable of completing dangerous tasks, he will have to team up with the strange creature from the Other Side. Tall, inhumanly strong, and menacing despite the handsome exterior, Shadow is just the tool Gray needs.
The moment Shadow lays his eyes on Gray, he wants to crawl under Gray’s skin and make the human his.
Gray on the other hand isn’t willing to get attached to a monster destined to do the devil’s bidding and disappear once his time is up. Rejected, Shadow has to do everything in his power to convince his human that they belong together.
But as the clock ticks away precious minutes of Shadow’s existence, Gray will have to choose between his loyalty to the Kings of Hell MC and responsibility for the creature he brought into this world.
*
“Do you feel me running through your veins?”
Gray nodded.
*
POSSIBLE SPOILERS:
Themes: motorcycle club, alternative lifestyles, demons, monster, tattoos, secrets, crime, gothic, grief, mourning, enemies to lovers, forced proximity, fish out of water, opposites attract, demisexuality, gentle giant
Genre: Dark, paranormal M/M romance
Erotic content: Scorching hot, emotional, explicit scenes
Length: ~150,000 words (Book 4 in the series)

Gray is a member of the Kings of Hell MC. He devoted his life to the club, after losing his twin brother, and his arm; he agrees to give up his shadow to save Jake (On Your Knees Prospect (king of Hell MC #3))
Shadow wants one thing … Gray. He’s bonded to him, and he wants to belong to him as much as to possess him.
Gray wants nothing to do with Shadow, for him, he’s just a monster, an entity with the purpose to serve Baal and disappear.
3 months, that’s what they have, if Gray wishes never to have met Shadow, Shadow will do everything to convince Gray that they are meant to be.
He can only hope to have enough time for that.

Gray’s Shadow is book four of the King of Hell MC series by K.A Merikan.

No need to tell you how much I love this book and the authors. This series gets better and better with each book, and they always find a way to surprise me.

Gray is a solitary, discreet and reserved. Losing his twin brother broke him (understandable), and Gray is used to staying alone. He loves his brothers and his club, but he doesn’t really fit with them all the time. When Shadow came into his life, Gray only sees a “monster” at first, a “thing” that inhabited a human body. But the more time Gray and Shadow will have to be together, the more Gray will see himself mirrored in Shadow. I loved Gray, he always intrigued me, and this book gives me answers. He’s so lonely, so in pain since his twin’s death, I wanted to cry for him, I understood his tortured soul better, and was happy to read that for once things can turn out beautifully for him. In an unconventional way, but, hey, we’re talking about K.A Merikan, nothing is conventional in this series…even Laurent!

Shadow is FANTASTIC. He’s fabulous, funny (I laughed out loud so many times), kind and pure with some bloody, deadly tendencies. I can’t really describe Shadow, you need to meet him directly, and you’ll understand. He’s beautiful and super funny. He has this duality between a pure, innocent baby and a bloody serial killer. Let’s just say, don’t threaten Gray and you’ll be able to keep your head on your body. I thought no one in this series could beat Laurent in my heart… But here comes Shadow, I completely adored him.

This book was a good addition to the series, while we learn about Shadow and Gray; we also learn a little bit more about Baal and his plan. The authors don’t give us any clue as to how the guys will survive the doom of Baal coming. We only have one book left, and I can’t figure out how our favorite gang will survive, and it starts to get my blood and my anxiety levels a little bit higher.

K.A Merikan gave us another masterpiece, with good writing, a lot of creativity and humor in a complex plot. It was brilliant, and I can only hope to have the last and final episode soon, even if it breaks my heart to say goodbye.

5 OptimuMM’s for Gray and his Shadow!