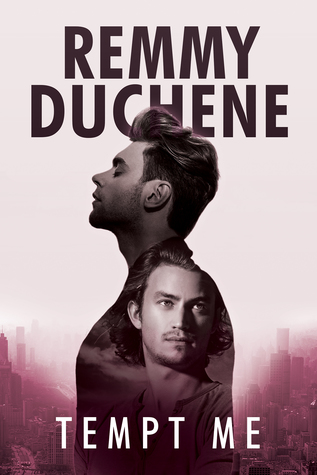 Officer Gabe Ford knows finding love could be a tad problematic—especially since he hasn’t come out to his partner of six years yet. But what’s a guy to do when his body wants what his brain is saying he can’t have?
A year and a half after a breakup, Jason Tomlinson isn’t actively looking for a relationship. Hell, he can do bad all by himself. But Gabe Ford is just too damn yummy to resist. Just as things are beginning to pick up, one bullet may end it all before it even begins.

Tempt Me is a Contemporary romance novella with a healthy dose of erotica thrown in. Officer Gabe Ford and his partner are seeking out some grub when a sexy mountain of a man lets them into his bar before opening hours. Gabe isn’t sure how to react to the openly flirtatious bar owner, but he is certain that he doesn’t want his partner to know he’s gay. Jason Tomlinson hasn’t been in a relationship since his ex a year and a half ago. He hasn’t openly looked and wasn’t when the sexy as sin Officer Gabe Ford knocked on his window seeking out a big daddy burger.

Gabe was adorable, in a sexy as sin sort of way. He was a little shocking with his kinkiness in the bedroom. Definitely not the one I assumed would be. I love how shy he is to ask for what he wants but then gains confidence as the relationship grows.

Jason is a little older than Gabe, but he’s tall and sexy even with a man-bun that he hates. I really enjoyed this character. He seemed to have a lot of facets to his personality that were really intriguing especially in such a short book. I loved how he let Gabe be free and open during sexy times. I really would like to read more of these guys.

Tempt Me was an interesting mix of romance and erotica. I’d say it tipped more towards erotica than actual romance. There were a lot of different kinks being thrown out in this novella. These guys were not shy about trying new and different things, and I really enjoyed seeing that in a book. It wasn’t a BDSM book by any means, but it was a couple trying some good old-fashioned kink and I loved it. The plot was set up really well. Definitely a couple of intense moments. About halfway through the book, I felt like things were starting to feel rushed and thrown together. I did enjoy it. It’s definitely a good, hot, short read for those late nights.