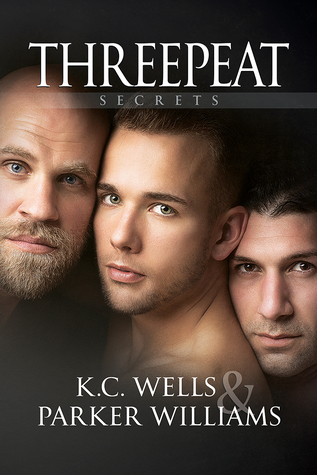 Can two Doms open their hearts again for a young man desperately in need of their help?
Two years ago, Aaron Greene and Sam Thompson were devastated when their submissive broke the contract that bound the three of them together. They still wonder what happened and whether they can find a way to move forward. When Aaron finds a sick young man by the curbside, his protective instincts kick in, and after consulting Sam, he takes Tim home.
After being thrown out of his home, Tim Waterman finds himself on the street, doing whatever he needs to survive. Until a bear of a Good Samaritan scoops him up and saves him. Then one bear becomes two, and a chance discovery gets him thinking about what might be, if he’s bold enough to make a move.
So what happens when Aaron and Sam wake up one morning to find Tim naked in their bed? Will they get a new chance at life, or will history Threepeat itself?

Book three in the Secrets series is a MMM and I do not recommend it being read as a stand-alone. For six years two men thought they had the life they had always dreamed of. Two Doms in love with each other and shared that love with their perfect sub. One day that had come to a heart-crushing end when their perfect sub begged them to let him out of his contract. Two years later, they’re barely hanging on to the love they have for each other and the bleak life they now share. Aaron and Sam are both Doms and have been friends for years. They’re in love with each other, but because of them both being dominants, they want a submissive to share in their lives, hearts and of course in bed. They just don’t know if their hearts can take another blow. The saying “you find love in the strangest places” definitely rings true for these guys.

Aaron is a highly successful home renovator and contractor. He has this savior complex, and he wants to save and help everyone he can. He was absolutely devastated when their former sub begged to be let out of his contract after six years. He has beaten himself up over the fact that he never gave Aaron and Sam a reason. They had no idea what they did wrong. Aaron wants to get past his hurt even if it’s just for Sam, but he can’t seem to figure out how. I loved Aaron and hated that he was in so much pain. He’s such a big-hearted and lovable character.

Sam is a businessman and also a dom. He’s a rough and grumble kind of guy. He too was devastated at losing his former sub, but after two years he’s ready to start living again. He wants Aaron to join him at the club but after doing a couple of scenes with different subs left him unfulfilled, Aaron has protested going back into the scene. Sam is the more dominant of the two, and he knows that as long as neither man will bottom for the other and the loss of their sub, his relationship with Aaron is holding on by a thin string. Something has to change, or he’ll have lost both of the men he has ever loved.

Tim has been mentally and physically abused by his family his entire life. When he came out as gay, his family kicked him out of the house with nothing but the clothes on his back and the after effects of the beating they gave him. Out on the streets at eighteen, he’s learned to survive, but between being extremely sick and emancipated, he’s not going to survive much longer. When he’s close to passing out on a sidewalk, a man saves him and brings him into his home. When he wakes up his life is forever changed by not one man but two. Two men who are sexy as sin but completely off limits. After becoming their housekeeper, he finds a contract and decides that he knows what he wants and he wants it from the two men who he has come to love and care for. Tim is the sweetest guy. Even though he proves to be submissive, he’s no pushover. Loved his character!

These guys go through so much heartache and pain. I definitely teared up a couple of times. I have been rooting for these guys since book two, and I’m so glad they got their HEA. It was a very strong dynamic between the three of them and I loved the development and the natural path their relationship took. Nothing was forced or rushed. It was organic and well thought out. I can’t wait for the next guys in the series. Definitely check out these authors and the other books they write individually.

I highly recommend them all.