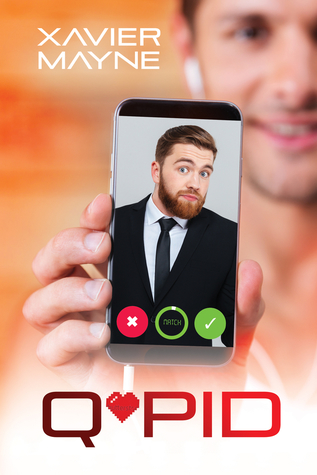 Can a computer program understand love better than the human heart?
Archer, the AI at the dating service Q*pid, realizes humans don’t always make the best choices, so it begins making some unconventional choices for them.
Fox Kincade is the last of his group of friends to be single, so he’s delighted when he discovers a new match in his Q*pid app—one that, according to the new AI wizardry, should be the love of his life. Instead of the woman he’s expecting, he’s paired with Drew Larsen, a shy, somewhat nerdy PhD student who has also grown discouraged with romance.
Drew and Fox have little in common—aside from the fact that they’re both straight. Or so they thought. But as the guys get to know each other, they realize Archer might have the right idea. Their path isn’t smooth, because both need to overcome every idea they have about themselves and what true love might look like. But with the help of Archer—and some friends who have stuck with Fox and Drew through the thick and thin of their relationship trials—they might find their way into each other’s hearts.

We know dating apps, right? In one way or another, they’re just for a quick hook-up or searching for our eternal soul-mate. What? You don’t know? Well then, maybe it’s time for you to give it a try.

Q*pid is a dating service, and Veera is one of its developers. They are ready to launch the new algorithm, an algorithm controlled by Archie, an A.I. developed by Veera. They send out a message for their top users to give Archie a try. But to do that they must give access to their social-media file and facial analysis through their cameras. It’s a high risk for exposure, but our MCs are desperate enough to find their true love, so they accept the terms and conditions and all the privacy settings. Curiously it seems that Archie’s algorithm works just fine, until one Sunday morning, where by accident, he ignores one tiny little fact to consider, and that would be gender preference…

Fox is the ultimate analyst. He has a spreadsheet to rate all his dating. A system with what he eliminates the women he’s not compatible with. After every date, he and his bro-buddy Chad analyse the last night’s events together. Fox is convinced he’s a straight man, who never questioned his sexuality. He has a very clear idea in his mind: to meet the one and marry her.

Drew is writing his Ph.D. and living the life of a poor student. He also had many unsuccessful dates behind him. While he’s checking Q*pid at least 3 times a day, waiting for the big connection, he’s selected to try out the AI of Q*pid, but he ony hesitates few minutes. So imagine his shock when after a few days, he gets a 99.5% match. He’s eager to finally see the woman of his dreams, but that woman turns out to be a man.

This book is an amazing read!!! I couldn’t put it down until I finished it! Maybe the first half of the book is a bit boring, but then things get active. It’s humorous, syrupy-romantic, and full of confusion on the part of the MCs who try to enlarge the horizon when it comes to their sexuality.

The intimate scenes were genuine. Being a man, I know what a real quickie means, and it’s reflected in this book. Maybe some of you will not agree, but my fellow men readers will be able to relate to it.

All in all, it’s a good read! I wouldn’t mind that this would turn into a series, or read a bit more about Fox and Drew!