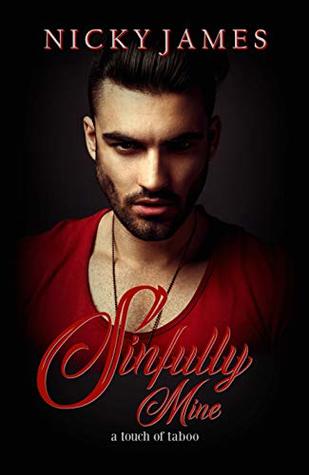 Four years ago, mistakes were made, lines were crossed, rules were broken.
It was wrong, and it never should have happened.
But, the past refuses to stay buried, wrongs start feeling right, and lines begin to blur.
Sometimes, the heart wants what the heart wants, and nothing will stand in its way.
Consequences be damned. Rules be damned.
Sometimes, secrets are sinfully delicious.

I’m going to start out by saying that yes this is a book about romantic love between two brothers. This book in no way is erotica or smut. I have read both, and this book is nothing like that or anything I’ve ever read.

If you looked beyond the relationship of the characters, you’ll find a beautiful love story with a depth that rivals some of the best romances. Emerson and Kaiden share a unique bond, and as the boys grew up, their bond became stronger until one night their bond had been irrevocably broken.

Emerson has loved and cared for his brother since his brother was born. His mother has an illness that makes her emotionally detached from her children. It has caused both boys to lean on each other for emotional support. Emerson has taken his job as big brother seriously. He’s used the more dominant side of his nature to help guide Kaiden through his life. As Emerson got older, he realized his feelings for his brother had developed into something that he can’t explain but knows that is wrong for a sibling to feel towards another sibling. He’s hidden these feelings successfully, but one night, Kaiden’s reaction towards his more dominant side had Emerson crossing a line and losing his brother in the process. Emerson, bless his heart, is such an endearing character. You can’t help but love him. He has this sweet side to him where he cares about people, and then he has this sexy dominant side that had my heart palpitating.

Kaiden has always looked up to his big brother. Emerson always involved the younger sibling in his social life and always looked after Kaiden. Without Emerson, Kaiden would fall apart, and he knows this. Emerson is the glue that holds Kaiden together. So why did Emerson have to betray him like that? It had been four years that his brother’s been gone and now he comes back with hopes of fixing Kaiden. Kaiden wants nothing to do with Emerson. But he can’t deny how Emerson makes him feel. He hates it because he doesn’t understand it. He hates the control Emerson has over him, especially his emotions. He needs Emerson to put him back together, even if Emerson was the one who broke him. Kaiden is a wreck. He’s all over the place, and I loved how flawed he was. His character is absolutely brilliant.

This story had me so emotionally involved I couldn’t even contemplate putting it down. This book is one of the best contemporary romances I have ever read. The secondary characters were so thought out and well-written with their own side stories that I was truly astounded by Nicky James’ writing. Every aspect of this book was brilliantly written. How does she write such a taboo topic and make it so beautiful?

Nicky James is an absolute treasure. If you are willing to see beyond the relationship of the characters and look instead at the heart and soul of the book, you will find a brilliantly written, unique and powerful story. If you decide you can’t read this, then I would encourage you to read her other fabulous stories of men, heartache, redemption and ultimately love.