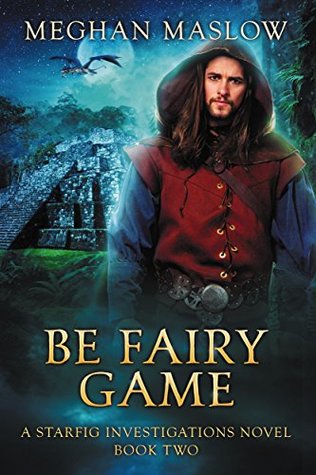 They’re baaacckk!
When a simple ‘find & fetch’ case throws private investigator Twig Starfig and newly-minted wizard, Quinn Broomsparkle, into the middle of an EBI murder investigation, it’s just another day in the Elder Realm.
If murder were Twig’s only problem, he’d be the luckiest half-dragon in the land. Murder he can handle. Fulfilling his promise to his scheming, power-hungry father to run for a seat on Lighthelm’s city council? Meh, he’d rather face a demon with a toothache.
On top of their case going sideways, and Twig running for a council seat he really doesn’t want, Twig and Quinn are forced to face some unpleasant realities about their budding romance, while still learning how to handle the wizard-familiar bond they now share. Throw in a red fury with abysmal taste in boyfriends, a ghost pirate-parrot who drinks too much, a murderer who will stop at nothing to get what they want, a host of new friends and enemies, and you’ve got a situation where no one is safe and everyone is Fairy Game.

Book two in the Starfig Investigations series is crazy entertaining and full of excitement, and shenanigans. Twig and Quinn are caught up once again in an epic adventure. Murder and mayhem follows these two everywhere they go. Quinn is now Twig’s familiar, and they have a lot of relationship woes in this book, but the epic romance that was budding in book one is still shining bright.

Twig is just as adorable as he was in book one. The half-dragon, half-fairy is such a joy to read. He has a few changes happening and some healing that has to be done from his past, but the sassy dragon-fairy is a tough guy. His dad is still driving him absolutely crazy, and there’s a dark elf just waiting to get his head torn off. Fig and his dragon are constantly at odds. His dragon is all about finally claiming Quinn, but Fig knows Quinn isn’t ready, and it definitely causes some contention between the two.

Quinn is hilarious in this book as well as book one. I love how strong he’s become since becoming free. He’s getting the hang of his powers as a wizard, and he’s definitely not taking any crap from anyone. Book one was more focused on Quinn as a character than book two. I have a feeling book three will be centered more around him.

I really enjoyed these books. Both are absolutely fantastic. The plot in this one dragged a little more than in book one, but it definitely didn’t deter my obsessive reading. I had to know what happens and so the pages kept on turning. I highly recommend this book, and I do advise that you read book one prior to book two. It was an absolute joy to read.