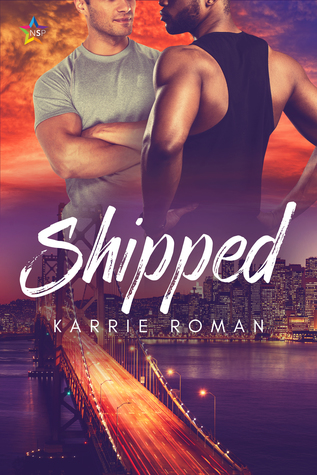 Ryan Lowe has been a lonely nobody all his life. The only time he ever feels the rush of living is when he’s acting. Wanting to get as far away from his small town life and alcoholic father as possible, he leaves Australia to pursue a career as an actor in the bright lights of Hollywood, never stopping to consider the fame that might come with it.
Lucas Evers understands fame. He’s been a successful actor on the small-screen for years and loves his career. Nothing comes for free though, and the price he’s paid for his success is keeping who he is hidden from the world. He married his best friend to keep both of their secrets, and until now, he has been content with the cost of his fame.
When Lucas and Ryan are cast in a new television series based on a wildly popular book series everything changes for them. The show is a worldwide hit and together they have just become the most popular ship on the planet. As they begin to realize it’s not just their characters falling in love, the cost of their fame rises. Together they must face stalkers, anxiety, panic attacks, and attempted murder.

Ryan and Lucas are both actors and meet at Ryan’s audition for a part on a popular TV show that they will both be starring in as eventual lovers. The chemistry is definitely there from the beginning. I wanted them to hurry up and get to the juicy bits, but I’m so glad they didn’t rush. The friends to lovers trope is one of my favorites, and the author did a fantastic job with it. I have to admit though, I had no idea what “shipped” meant until I read this book. At some points, I felt that the author did overuse the term quite often when it wasn’t necessary to that particular part of the story.

Ryan Lowe is such a sweet and endearing character. He’s from a small town in Australia and hasn’t had the best upbringing. His father is an alcoholic and doesn’t have much to do with Ryan. Ryan’s never really fit in anywhere, and he’s sort of a quiet loner. As a kid, he got a part in a school play, and he decided that that was what he was going to do—he was going to become an actor. As he got older, he packed his bags and moved to California. He gets the part on this crazy popular television show, he becomes best friends with the hunky Lucas Evers and even has an embarrassing fan-girl moment in front of his hero. But not everything is perfect in Ryan Lowe’s life, and he doesn’t know what or if there’s anything he can do about it.

On the outside, Lucas Evers has it all. He’s a rising Hollywood star with a beautiful wife and a loving family, but things aren’t always what they seem. Lucas is such a caring and loving character. He married his best friend to help hide both of their secrets and get her away from her abusive parents. When he became a successful actor, he moved his family into his apartment building and foots the bill for all their lifestyles. When he meets Ryan, he’s instantly attracted to him, but he’s not sure if Ryan’s gay or bi so he settles on them being nothing more than friends. The struggle is real. How Luke kept his paws off of Ryan for as long as he did is a wonder. Add a stalker and attempted murder into the mix, and it makes for one wild ride.

This is book 1 in the Until You series from author Karrie Roman. This is a new author to me, and I thoroughly enjoyed this book. It’s a contemporary romance with some dramatic flair thrown in. The friends to lovers trope was done extremely well. The chemistry between the characters was a well thought-out slow burn but with some extra coal on that fire. I loved the easy-going nature of the characters throughout the book. The secondary characters were enjoyable. I definitely approve of how Lucas’ wife is portrayed. She’s such a great character. In this book, there is definitely some drama happening in the background that throws the two main characters in a pretty crazy situation. I had no idea who the antagonist was until the end. So that was definitely a plus. The editing was great, and I love the cover.