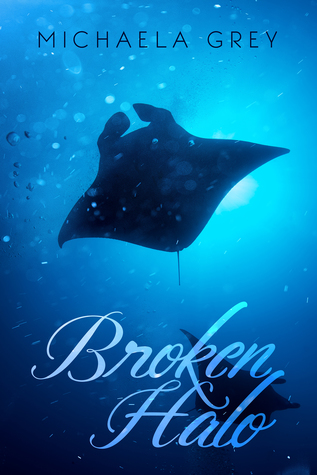 Micah Ellis is an affluent businessman, comfortable in his life and work, as long as nothing happens to shake up his routine. Which is exactly what one Devon Mallory does, with his bright blue eyes and dirty skin and the forceful personality that’s everything Micah desperately needs but is too afraid to ask for.
Micah and Devon enter into a Dom/sub relationship and navigate the world of BDSM and Micah’s crippling insecurities as they gradually fall in love. But Micah’s past is coming back to haunt him, and they must face it together–and that means learning acceptance and discovering that they both deserve love their way and on their own merits.

Broken Halo is the first book in the Mended Hearts series by Michaela Grey. I read the second book, Broken Rules, first. The books are standalone, so you can read them in any order. I liked Broken Rules enough that I wanted to read the first book in the series and I am so glad that I did. I loved the book. I loved that the Dom isn’t a part of the lifestyle but finds himself dating a submissive that is part of the lifestyle and can’t give it up. Instead of it being a deal breaker, he does his research and talks to the submissive’s ex, who is a Dommie, when he needs things clarified, or he wants to talk through a scene. Devon is a natural Dom, but he tries not to be hesitant during his scenes, and I loved how he took care of Micah, the sub, afterward during sub drop and vice versa when Devon has his first Dom drop. The chemistry between Micah and Devon was hot whether they were doing a scene or not.

Micah Ellis is a businessman, who’s comfortable in his life and work, but only as long as nothing happens to shake up his routine. He definitely has lots of issues. He’s a germaphobe. As a result, he doesn’t like dirt, grime, germs, crowds of people, and especially kids. And this leads to anxiety attacks and a caustic stuck-up attitude. So when his car breaks down outside an unfamiliar mechanic’s shop, he isn’t thrilled especially when he sees how dirty and grimy it is. It doesn’t even matter that the mechanic is a gorgeous hunk of a man since he’s covered in grease. In typical Micah fashion, he manages to offend Devon, the mechanic, enough that he refuses to let him pay for the repairs and tells him to leave. But Fate brings them back together, and Micah gets the chance to apologize. They end up starting a relationship which turns into a Dom/sub relationship after Micah confesses to his desires.

Devon is a mechanic that owns a shop. He doesn’t like Micah at first since Micah puts him down for being a blue-collar worker since he’s a white-collar worker and thinks that he’s better than him and Devon kicks him out of his shop without paying for the work that was done. I liked that they get the chance to apologize to each other and give each other another chance. I also loved that Devon is a sweet guy and works really hard to give Micah what he needs in their relationship even though he doesn’t know a lot about it.

I can’t wait to read more books by this author. I might have to give her Coffee Cake series a go. It sounds promising.