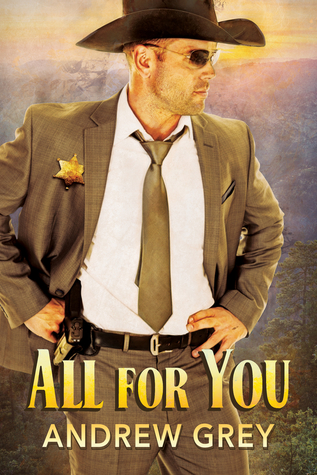 The only path to happiness is freedom: the freedom to live-and love-as the heart wants. Claiming that freedom will take all the courage one young man has… but he won’t have to face it alone.
In small, conservative Sierra Pines, California, Reverend Gabriel is the law. His son, Willy, follows his dictates… until he meets a man in Sacramento, and then reunites with him in his hometown-right under his father’s nose.
Reggie is Sierra Pines’s newly appointed sheriff. His dedication to the job means not flaunting his sexuality, but when he sees Willy again, he can’t escape the feeling that they’re meant to be together. He’ll keep Willy’s secret until Willy is ready to let the world see who he really is. But if going up against the church and the townspeople isn’t enough, the perils of the work Reggie loves so much might mean the end of their romance before it even gets off the ground….

I loved All for You by Andrew Grey. It reminded me of the Carlisle Cops and Carlisle Deputies series which I love to read. It was well written with a great storyline and wonderful vibrant characters and supporting characters. The pace of the book was steady, but it kept my attention and had me reading well into the night to find out what happened in the end. I couldn’t get enough of it. It had all of the elements to it that I have come to expect from an Andrew Grey book. I laughed, I cried, I screamed at some of the people, and I loved the chemistry between Reggie and Willy.

I loved Reggie. He’s Sierra Pines’ newest appointed sheriff, and his dedication to his job means not flaunting his sexuality, but that doesn’t mean that he will deny his sexuality if questioned. He’s been appointed as sheriff to clean up the corruption in the small town, but first, he has to wrestle control of the town away from Reverend Gabriel, which could lead to a huge power struggle if Reggie doesn’t do it just right. I loved how he was able to use the rules of Reverend Gabriel’s faith to get his way instead of using threats like the Reverend Gabriel does. I also loved that he wasn’t intimidated by the mayor or the board or anybody else in a position of power. And I loved how he cleaned up the corruption in his own department, all while having a closeted relationship with the Reverend’s son, Willy.

I loved Willy. He’s young and a little inexperienced. He got a taste of freedom when he went away to college, but all of that went away when he returned home. He may be over twenty, but he still lives at home under the rule of his father. A father that used to be fun-loving and a joy to be around, but an accident in the family resulting in the death of a sibling changes the Reverend into a cold, unfeeling control freak with a short temper. Somebody that the whole family is afraid of. I loved when Willy and Reggie meet for the first time in Sacramento and Reggie saves Willy from some bullies and doesn’t take advantage of him when Willy offers to hook up with him. I loved that he was a gentleman even if he was kicking himself later. I loved watching Willy gain confidence and become a strong individual from being around Reggie. I also loved the ending of the book and that everybody gets their HEA.

Overall, another great book by Andrew Grey that I would recommend to everybody.

One thought on “Review: “All for You” by Andrew Grey”