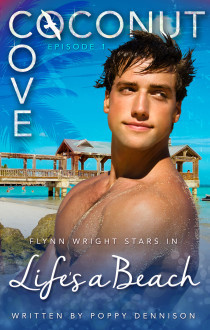 Welcome to Coconut Cove where you’ll always find oiled beach bodies, palm trees, tropical drinks, and plenty of drama!
Coconut Cove is the hottest new sensation to sweep the nation — a gay teen drama filled to the brim with hot stars and even hotter action. It’s catching the public’s attention and winning their hearts. But all the drama, heartache, and life lessons aren’t just for the characters on the screen. The fledgling actors behind the scenes have more than their fair share of love and catastrophes. They may only play teens on TV but when it comes to romance, these twenty-somethings still have lessons to learn.
From the scheming ex determined to cash in on a rising star, to the hunky high school crush resurrected from ancient history—from the nice guy with a naughty past, to the snarky diva with attitude—there’s plenty of scandalous hidden affairs and seriously sexy demons hiding in just about everyone’s closet on Coconut Cove.
You just have to be ready to drink it in. Bottoms up … or should we say off?

I’m fixing to gush hardcore. You’ve been warned. I absolutely loved this book. It was sweet and sassy with a good measure of sexy thrown in. I have never read a Poppy Dennison book before now, and I plan to remedy that immediately. The main characters were fantastically written, and I enjoyed the secondary characters just as much. The plot wasn’t complicated, and it had very little angst which was perfect for this type of book. Too much drama and it would have ruined it.

Flynn Wright is an up and coming actor that unfortunately started a relationship with the wrong guy. His roommate/casual bed buddy wanted more from their causal relationship than what Flynn was willing to give and in turn, tried to ruin Flynn’s acting career. Flynn gives him the proverbial finger when he lands a role on a new gay television show being filmed in Key West. The timing couldn’t have been more perfect.

Sexy bartender Seth is a brooding artist with a killer bod and a dirty mouth. When the limelight of being a successful artist in New York takes it toll, Seth decides a change of pace is in order. Seth purchases a bar and a beach house in Key West and wants to love his life as uncomplicated as possible. Of course that all changes when the show Coconut Cove moves to Key West and the film crew decides that his little bar is their perfect hang out place. Once he meets the sexy sweet actor Flynn Wright, he’s immediately attracted but the prospect of being thrust into a world he no longer wanted to be a part of has him questioning if Flynn is worth the risk of losing his anonymity and peaceful life he’s carved out for himself.

This book is a definite must-read. It’s a short story, but it is part of a series. The next book is written by a different author, but I’m hoping it still maintains the same charm as this book has.