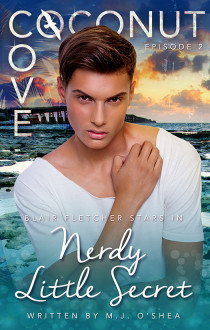 Welcome to Coconut Cove where you’ll always find oiled beach bodies, palm trees, tropical drinks, and plenty of drama!
Coconut Cove is the hottest new sensation to sweep the nation — a gay teen drama filled to the brim with hot stars and even hotter action. It’s catching the public’s attention and winning their hearts. But all the drama, heartache, and life lessons aren’t just for the characters on the screen. The fledgling actors behind the scenes have more than their fair share of love and catastrophes. They may only play teens on TV but when it comes to romance, these twenty-somethings still have lessons to learn.
From the scheming ex determined to cash in on a rising star, to the hunky high school crush resurrected from ancient history—from the nice guy with a naughty past, to the snarky diva with attitude—there’s plenty of scandalous hidden affairs and seriously sexy demons hiding in just about everyone’s closet on Coconut Cove.
You just have to be ready to drink it in. Bottoms up … or should we say off?

Book two in the Coconut Cove series was charming. The characters and plot were pretty simple. There was no real angst or conflict, and the romance part fell a little flat. It didn’t add much to the series to be quite honest.

Blair Fletcher is a native of Key West. He lives with his mother, and to help her with the bills, he worked as a waiter at a local restaurant. The show’s director spotted him and signed him for her new show Coconut Cove as the queen bee Ryder. Being the complete opposite of his character eventually takes its toll, and he struggles on camera. Bring in his assumed straight next-door neighbor that recently moved back to town, with hints of why he was back but never actually explained anything, who he has secretly pined over since he was a teenager and he’s a hot mess.

Sander Johansen was a teenage bad boy. He was the cool kid that every other kid wanted to be or be with. He has no idea his shy and a little nerdy next-door neighbor is a star on the new hit show that has taken over Key West. He’s back in town and looking for work and just so happens to get a job as a set carpenter which puts him directly in the path of sweet, unassuming Blair.

This book was good for a short read, but I was really hoping it would have been more. It also ended rather abruptly. We never really got to know the main characters as a couple. I did enjoy the little snippets from the show.