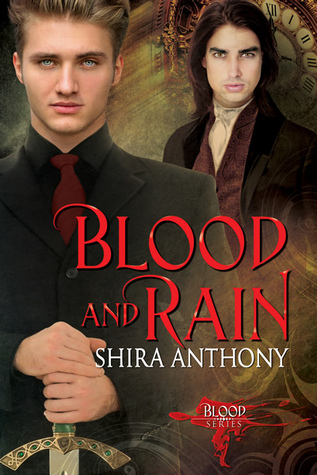 Adrien Gilbert has spent several lifetimes searching for the love he lost. Born in the 1800s into a clan of fabled vampire hunters, Adrien once wanted nothing more than to tend his family’s vineyard in southern France or read a good book. But Adrien’s peaceful existence ends abruptly when his older brother, François, is murdered. Bound by his hunter’s oath, Adrien sets out on a path that will forever change his life when he agrees to execute his brother’s killer, the vampire Charles Duvalier.
After months chasing the elusive Charles, Adrien reluctantly makes a bargain with Nicolas Lambert, an ancient vampire. Adrien will escort Nicolas to Paris for his marriage to a rival clanswoman, and Nicolas will help Adrien find Charles. Nicolas’s quiet strength and gentle heart soon convince Adrien that Nicolas is nothing like the vampires he has sworn to destroy. As the wedding date draws nearer, a force intent on destroying the fragile peace between the vampire clans threatens to tear apart both the vampire realm and the world of the hunters. To secure both past and future for those he loves, Adrien must find a way to stop the looming war between hunters and vampires. But first he’ll have to let Nicolas go.

I’m going to start out by saying that I really enjoyed this series. It’s one of the best vampire series I’ve read. Flashbacks in books have always been an issue for me because a lot of time they’re not very easy to follow. This book is book one in a three-book series. Being book one, there’s a lot of information being thrown out and adding flashbacks, I got a little cross-eyed. I thought the storytelling and world building was absolutely fantastic. The author did a great job with not only telling an intriguing story, but she actually brought in so many details that it was so easy to be transported into the world she created.

Adrien Gilbert is a hunter. Born into one of the most powerful hunters families, he accepts his place, but he also wants to live a quiet life on his family’s vineyard. The problem is that he pledged his life to the hunters at age sixteen, so his life is not his own. When his brother is murdered, things quickly go from peaceful to utter chaos. Being a Gilbert and a bound hunter, he’s expected to perform his duties no matter how high the cost. His first assignment, take the life of the vampire that murdered his brother.

Nicolas Lambert is an ancient. Born into one of those oldest and most powerful clans, he’s surprisingly humble and soft-hearted. Nicolas has pledged to marry a clanswoman from a rival vampire clan seeking a truce between the two ancient rivals. Adrien has been hunting his brother’s killer for months with no luck. He won’t give up, but it’s like he’s just chasing a ghost. When an old mentor of Adrien’s presents an opportunity to help catch his brother’s killer once and for all, Adrien knows he can’t refuse. He needs to avenge his brother’s death and complete the contract from the hunters by any means necessary. Nicolas’ overly protective brother, Jean, hires Adrien to escort Nicolas to his betrothed. All Adrien has to do is get Nicolas to Paris safely, and Nicolas will help him find Charles, the vampire responsible for his brother’s death. Simple right? Not even close.

I enjoyed the characters although sometimes I got a little impatient with Adrien’s childishness. He has a lot of anger towards vampires in general, which is understandable and I don’t necessarily blame him. I just wish he would actually seek answers instead of just holding on to his animosity. Nicolas is adorable. He is such an original character. I assumed with him being an ancient and clearly powerful that he would be insufferable, but he wasn’t at all. He showed so much patience with Adrien even when I felt Adrien didn’t deserve it. The secondary characters were just as enchanting as the main characters.

I highly recommend this series. The first book is a little mind numbing at times because a lot of information is being thrown out, but if you stick with it, you’ll find you’re flipping pages and rushing to find out what happens next.