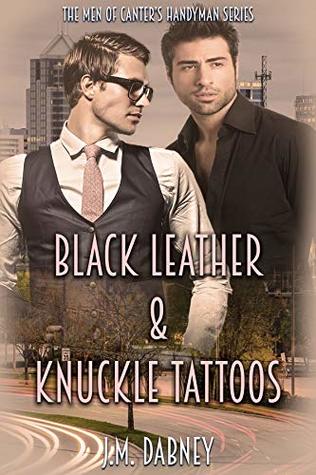 Kindergarten teacher, Troy Canter, fell hopelessly in love with leather and tattoos at the impressionable age of sixteen when cuddly, bad-boy Win interviewed for a job with the family business, Canter Handymen of all Trades. No one compared to the large man and never would. A decade later, Brent, Troy’s father, falls ill and he needs to take over the business for a while. Interacting Day in and day out with sexy Win is a cruel punishment.
Winston Sanchez hadn’t done a thing right in his life, except interviewing for a handyman job for Brent Canter. He loved his job, but an attraction to Troy Canter complicates things. As Troy ran the business while Brent fights cancer, it has thrown the man right in his lap. When an unexpected development in the package of a four-year-old daughter throws Win into a panic, Troy comes to the rescue.
Can a man who doesn’t think he’s worth much let go enough to open himself to the love of a man who thinks he’s worth everything?

Black Leather & Knuckle Tattoos is the first book in a new series by JM Dabney. In Clifton, North Carolina there’s romance in the air if only the two MC’s would wake up and smell the roses. As a kindergarten teacher, Troy Canter is used to playing by the rules and keeping his lustful thoughts about his dad’s foreman hidden is amongst the top of that list. When his father falls ill, he’s thrust into taking over his father’s construction company. This isn’t a problem except that now he can’t escape his crush, Winston Sanchez. When the shock of Win’s life comes in the form of a miniature version of him, he runs to the only person he knows he can count on. What Win doesn’t realize is that counting on the handsome kindergarten teacher is only the beginning of the emotional roller coaster he finds himself on.

Troy was definitely a fun character to read. Troy is the product of a college relationship ending after his birth. His father, Brent, dropped out of pre-med to raise Troy alone. His father went on to become the owner of his own company while his son became a kindergarten teacher. When Troy came out to his dad, his dad acted like I’m sure most teens would hope their parents acted, like nothing was amiss. Troy found his true love at sixteen, and no other man would ever compare. He wanted the older man, the only thing keeping him from pursuing him was that he worked for his dad. My heart hurt for Troy throughout the book. He’s such an amazingly sweet guy, and when Win kept ignoring the not so subtle hints that Troy wanted the older man, it was so gut-wrenching. Where I wanted to scream and throw a natural fit over Win being so obtuse, Troy handled him with the patience of a saint and unrequited love.

Oh Win, I loved to hate you and then fell in love with you. Winston Sanchez is the sexy older foreman of Troy’s father’s company. Win has a troubled past including incarceration. When he interviewed with his boss, Brent Canter, he had a chip on his shoulder and was sure the man wouldn’t hire an ex-con like him. Ten years later, he’s Brent’s right-hand man. He always knew he was bisexual, but he never acted on it. No man had ever had an effect on him but the one he thought he could never have. When a little girl that had his features showed up out of the blue, and he was thrust into fatherhood, he ran to the only man he could trust to help. Troy fell instantly in love with the little girl and became her self-appointed uncle. And that’s where things between the two frustrating men started to get really interesting and intense.

I absolutely adore JM Dabney’s books. She has a unique style to her writing that has me consuming title after title and instantly one-clicking. Every character and storyline are so thought-out and absolutely incredible. I have such a good time reading her books. This book is no exception. It’s not a long book, and I read it in one go. I get so emotionally invested in the characters that I’m blown away by the end. I can’t wait for book two, and I’m really hoping it includes a sassy young man and a hot older construction company owner. Hint, hint.