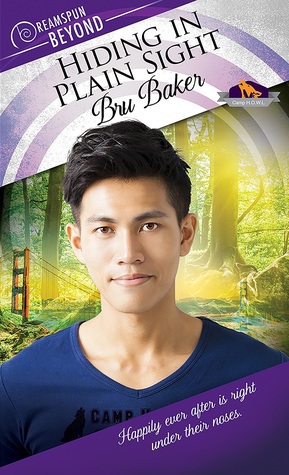 Happily ever after is right under their noses.
Harris has been keeping a big secret for years—his unrequited mate bond with his best friend, Jackson. He’s convinced himself that having Jackson in his life is enough. That, and his work at Camp H.O.W.L., keeps him going.
Things get complicated when Jackson applies for a high-ranking Tribunal job in New York City—far from Camp H.O.W.L. The position requires he relinquish all Pack bonds… and that’s when his wolf decides to choose a mate. Suddenly Jackson sees his best friend in a sizzling new light.
Their chemistry is through the roof, but they’re setting themselves up for broken hearts—and broken bonds—if Jackson can’t figure out a way to balance his career and the love that’s just been waiting for him to take notice.

I loved Hiding in Plain Sight by Bru Baker. It’s the third book in the Camp H.O.W.L. series and the twenty-eighth book in the Dreamspun Beyond series. The book is a standalone, so you don’t have to read the other two books in the series to know what’s going on with the couple in this book but reading the other two books will only enhance your reading experience since there are cameos from the other couples in this book. And the returning characters from Camp H.O.W.L. like the camp director Anne Marie and the camp counselors, doctors, and therapists. The story was well written with a great storyline and well-developed complex characters.

I liked that in this book we get to see more of how the campers get to spend their days while also getting to watch Harris while he works through his unrequited mate bond with his best friend, Jackson.

I loved Harris. I loved his dedication to the camp as a therapist and to keeping in touch with his friends. He’s known that he and Jackson were mates for a while, but he also knows that Jackson isn’t looking for a mate and so he decides he would rather keep Jackson as a friend than to try and mess that friendship up by pushing for more and potentially being rejected. Harris knows that an unrequited bond is easier to live with then a rejected mate bond. But that can’t help him from pining for his mate. When the camp gets a new celebrity camper, Harris is assigned as her therapist and the person in charge of her. Having such a big celebrity in the camp will mean upping their security system and border patrols while she’s there and guess who put in their security system? That’s right…Jackson, who works for Jordan at Fangs and Fury in between working as a police officer. For Harris having Jackson at the camp for the length of the celebrity’s stay will be both heaven and hell. Heaven because he’ll get to be around his mate every day and hell while he waits to find out if Jackson has gotten the Tribunal Enforcer job and will be moving to New York City and will have to break all of his bonds, both pack and personal.

I loved Jackson. He’s a little oblivious to the attraction between him and Harris until his wolf decides that Harris is his potential mate. He’s completely focused on his career and doesn’t have any plans for a mate. And actually to get the career that he wants as a Tribunal Enforcer he’ll have to break his bonds with both his pack and any personal bonds that he also has. His ultimate job is to be a pack second like his dad, and he knows that if he gets the Tribunal job that he won’t have any problem getting a job as a pack second. After getting back from his interview for the Tribunal job he learns that Jordan has taken a job for camp H.O.W.L. to overhaul their security for a high profile celebrity camper. Which would normally be no problem but for some reason, Jackson’s wolf has been pushing him to bond with his best friend Harris, which with the potential job requirements is inconvenient and is making him second guess if he really wants to continue with his plans for his career or give it up and keep his mate. Poor Jackson feels like a yo-yo.

I loved this addition to the series, and I think that you will too. If you have enjoyed the other books in the Camp H.O.W.L. series, then I recommend giving this book a try.