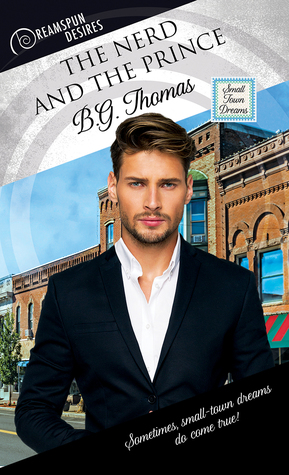 A Small-Town Dreams Story
Prince Charming is the man next door.
Small-town business owner Jason Brewster has big dreams: world travel, adventure, and most of all, a passionate romance worthy of a fairy tale. But he doesn’t believe fantasies can come true….
Until Adam moves in next door.
He’s handsome, cultured, European, and best of all, interested in Jason. It’s like something out of the stories Jason loves.
But Adam—whose real name is Amadeo Montefalcone—has a secret. He’s royalty, prince of the small country of Monterosia. Only he doesn’t want to rule, and especially doesn’t want the loveless marriage waiting for him at home. So he ran away in search of true love. With a man. And with Jason, he finds it.
But Adam can’t run forever. The truth will come out. If Jason can forgive Adam’s deception, they might find their happily ever after.

Jason Brewster is a small-town guy who dreams of adventure and epic love. Gay, out and proud, he dreams of his own prince charming that will love and adore him like in his dreams.

Amadeo Montefalcone, aka Adam, is a prince on the run. The pressure of the court and his family forced Adam to run away to live his life. He’s gay, in the closet and scared to come out to his royal family and people of Monterosia, his country.
Adam and Jason will start a beautiful love story, but, Adam has to come out to Jason about his real identity before his former life came back to bite them.

Is it possible that all your dreams can be true? That’s what Jason and Adam will have to find out, and most of all, fight to keep.

The Nerd and The Prince by B.G Thomas is a sweet candy book!
Jason is a young man who lives in his head. He grew up with all the stories that his mother told them (with his twin sister) about mythology and epic loves. Jason dreams about it for years, and he wants his own epic love story with his own prince charming. I liked Jason, he’s sweet and funny, and he cracked me up with his sister.

Amadeo or Adam is lost, scared, and broken at the beginning. He’s torn between his duty toward his country, and his wants of freedom to be whoever he wants. When he met Jason, he realizes that maybe he can have a real true love, but he’s scared to lose everything. Adam pains me; he’s so scared to live his life, so scared to love a man in the eye of the public that he chooses to live in the shadows of the world. But I liked that when he met Jason, he couldn’t deny his desire and despite his fears, he chooses Jason above everything else.

This book was a mix between fairy tales and mythology. It was sweet, full of love with an epic declaration of love and bravery with a great fight for the love of his beloved. B.G Thomas did an interesting mix of these two subgenres and added his own style with our pop culture.