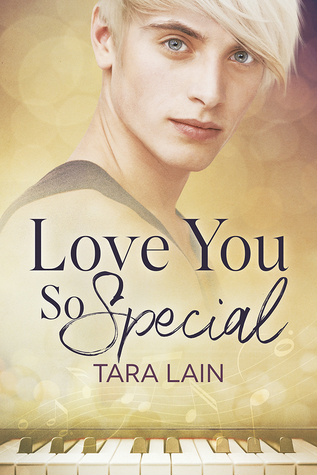 Can a man’s secret yearnings be revealed in a tank full of fish?
Artie Haynes knows he’s nothing special, with just-your-regular-brown hair, a solid plumber’s job, not much education, and a family that can barely get off the couch. But Artie has quirks—like his love of tropical fish, a landlord who’s a professor of existentialism, a passion for the amazing piano music he hears at a concert hall while he’s fixing the bathrooms—and the fact that he’s never come out as gay and probably never will. But when he’s hired to build a guesthouse for the pianist whose music enchanted him, Artie is swept up into an unimaginable world.
Francois Desmarais may be famous, rich, and revered as one of the world’s great classical composers and pianists, but he’s soothed and challenged by the inquisitive, stalwart, protective man in his back yard. When Francois’s terrible fear of crowds turns into a dangerous plot, Artie can stay in the closet or prove just how special he is.

Love You So Special is the third book in the Love You So series by Tara Lain. This book was just as cute as the first and second book in the series. And for another couple of hours, I was transported to the world that the author has created instead of sleeping like I should have been doing. But I regret nothing. Sleeping is overrated anyway, and I would much rather be reading a good book. And I know that I’ll always get a good story when I read a Tara Lain book. Her books are well written, nicely edited, have a great flow to them, and have loveable characters.

I loved Artie Haynes. He’s a typical blue-collar worker. He works as a plumber but knows other construction skills, doesn’t has a lot of education, and has a blue-collar family that doesn’t have much ambition. But Artie does have some quirks, like his love of tropical fish, a landlord who’s a professor of existentialism, and a passion for the amazing piano music he hears at a concert hall while he’s fixing the bathrooms. He’s also never come out as gay and probably never will. He’s one of those manly men who can pass as straight if he wants to and with working for construction companies, it’s better to stay in the closet. So when he gets a job to redo the plumbing for a very finicky client, he thinks nothing of it until he hears piano music coming from the house. Music that sounds like what he had heard while fixing the plumbing at the concert hall. Could it be that he’s finally found who was making the most beautiful music that he’s ever heard? When he finally meets the musician, he isn’t what he was envisioning. He was envisioning an older distinguished man, not the gorgeous young man that he meets.

I loved Francois Desmarais. He’s rich, famous, and a little on the eccentric side, but that isn’t very surprising of a child prodigy that has worked his way up to being revered as one of the world’s great classical composers and pianists. Francois still lives with his mother who’s also his manager. I liked Francois’ mother. She was the perfect combination of fierce French mama who will do anything to protect her baby and as her son’s manager she will also push him to do what he needs to do to stay revered. But Francois isn’t as confident as he sounds when he’s making music. He loves to compose music but hates playing concerts. He has major anxiety attacks around crowds and doesn’t like to be touched by strangers. However, when he’s around Artie, he finds that Artie has a calming effect on him and he finds himself soothed and challenged by the inquisitive, stalwart, protective man who’s working in his backyard.

I loved the chemistry between Artie and Francois. They couldn’t be any more different if they tried, but a love of music will give them the common ground they need to build a relationship on. Another great addition to the Love You So series by Tara Lain. I can’t wait to read the next one that comes out.

One thought on “Review: “Love You So Special” by Tara Lain”