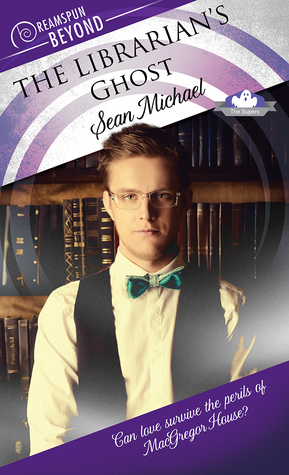 Can love survive the perils of MacGregor House?
The Supernatural Explorers are back and looking for their next big paranormal case. They might’ve found it in a plea from Payne, a mild-mannered librarian who has inherited the family mansion—MacGregor House. Since moving in a few months ago, Payne’s exhausted the list of ghost hunters and experts in his quest for help. The Supers are his last chance.
So why does normally good-natured cameraman Will take an instant dislike to Payne? For that matter, why has he felt irritable and angry since they arrived at the site? It soon becomes clear that the answers they seek will be found in the basement—where nobody has gone since Payne was a little boy. As the haunting grows deadlier, things get sweeter between Will and Payne, but all hell’s about to break loose when they breach the basement door.
Will they be ready?

The Supernatural Explorers are back with a new case.
Payne MacGregor had inherited the family manor. The family manor that passes between the MacGregor men. Payne invested everything he had to remodel the manor but unnatural things happen, and Payne calls the Supers to help him with his ghost problem.
He didn’t expect to meet Will, the cameraman of the team and who seems to dislike Payne on sight.
But what or who haunts this house decided otherwise, and Will and Payne would have to work their differences out if they want to stay alive. The Librarian’s Ghost by Sean Michael is book 2 of the Supers series.

This book was good, and I enjoyed it a lot.

Will is the cameraman of the team and the more skeptic about ghosts. He does believe in it, but only because he witnessed unnatural things and because of what happened to Blaine and Flynn (The Supers book 1). With his biker look, Will seems to be rude, and his first meeting with Payne doesn’t help him, and he acts like a big class A asshole. Even if things are tense between them, Will wants Payne and tries his best to make him forget their first meeting.

Payne is a librarian; he’s shy and a little bit of a hermit. He’s completely exhausted because of the inhabitants of his house, his supernatural roommates, who make his days and nights a nightmare. When he calls The Supernatural Explorers, he doesn’t know what to expect from them but certainly not Will’s rudeness and sexiness too. Despite a rough beginning, Payne will find more than answers about his house.

I loved the book and the plots. Yes, plots—plural. The main plot is about the investigation in the haunted manor. It’s was creepy and spooky, exactly what I expected from this book.

The second plot is about Will and Payne’s love story. It’s an insta-love but that didn’t bother me because it was well done and sweet and hot.

It’s a good book to read during this autumnal season, and even if it’s part of the Supers series, this book can be read as a standalone.

*We apologies for the inconvenience from our earlier review…