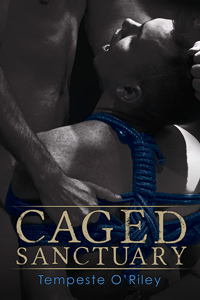 Kaden Thorn, a dental surgeon who lives a quiet life, has no hope of finding the love he craves. A vicious gay bashing cost him the use of his legs and confined him to a wheelchair. He has given up hope of finding a Dom or even a nonkink partner to love him. When his best friend practically forces him to attend a dinner party, the last thing he expects is a strong Dom who can see beyond his wheels.
Deacon James is an architect and a demanding Dom, but he has spent the past couple of years without a sub or partner. When an employee invites him to a dinner party to meet his girlfriend, Deacon smells a setup but agrees anyway. He prides himself on being an excellent judge of character, and when he meets the younger dentist, he sees past the chair and finds a sweet submissive man who more than piques his interest.
Kade’s fears and demons continue to haunt him, challenging Deacon to use everything he’s learned as a Dom to earn Kade’s trust and submission. Deacon’s determined, though, willing to battle all of it to have Kade by his side and at his feet.

Kaden Thorn was born to kneel at another man’s feet. Being a submissive is who he is. After his accident, he visits the BDSM club where he once thrived. He never thought the Doms he’d serviced and his fellow submissives would shun him like they did. Losing the most fundamental part of himself, he became a recluse. He was just going through the motions in life never really living. He has adapted his life around his disability. He can even perform surgeries as a dental surgeon in his renovated office. Now all he wants is a Dom who wants the submissive even if he’ll never kneel again.

Deacon James is a Dom and a very successful architect. As soon as he met Kaden, he wanted the other man, regardless of his limitations. He starts slow with Kaden, but the other man’s quiet vulnerability has his Dom nature taking the reigns pretty quick. He knows what he wants, and he’s determined to adjust his life and his home for the man who is everything he’s ever wanted.

I enjoyed some aspects of this book. The storyline was good. I had issues with the way the other Doms and submissives were portrayed. If they were that shallow then why would Kaden have gone there even before the incident? I know Kaden is a submissive, but he’s also a successful surgeon. The book had him portrayed as a meek and timid guy who in real life I would have feared for him because he would have just taken any ole Dom that showed him attention. You can have a disability and still be a strong person. I really liked Deacon’s character and the secondary characters. All in all, it was a good book and I enjoyed the read.