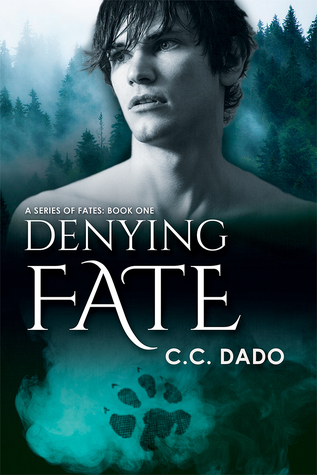 Fate is a funny thing. Some try to cut its threads, while others wrap themselves in it like a blanket.
Young wolf shifter Max is cocky and crass. Unlike others his age, he has yet to discover a talent that will serve his pack. Since childhood, he’s been convinced the pack alpha is his mate, but Alpha Christian cannot envision unfiltered and directionless Max taking the place of his elegant mother at the head of the pack. As Max begins to build a life with his best friend, he also begins to see that maybe what he thought was inevitable was all in his head, and it’s time to move on.
Or are they both denying fate?

Denying Fate is the first book in the A Series of Fate series by C.C. Dado. I loved this book. This is the first time that I’ve read a book by this author, and so I wasn’t sure what to expect in the way of a heat level. I was slightly surprised that there were no on-page sex scenes. Content-wise this book would be acceptable for a teen to read. I happen to love to read a wide range of books with or without sexual content and watch a lot of shows and movies that are made for teens, so this was right up my alley. The book is about Max and Christian, but the book is told from the point of views of Max and his best friend, Seth. It was a little weird having the POV from Seth instead of Christian, but I liked it. I liked that Seth was Max’s protector and helped balance Max’s more flamboyant and energetic character. I also liked how Max complimented his friend with being an extrovert to Seth’s introvert and how he would interact with the customers in the front of the store which allowed Seth to hide out in the back and continue to bake all of the goods.

I loved Max. He’s had a hard eighteen years living with an abusive father who kicks him out at eighteen, but it hasn’t dampened his spirit. He’s very much the optimist. He’s sometimes a little over the top and immature, but he’s only eighteen, so that does fit with his character. He’s believed that Christian is his mate since he was little and has proposed multiple times, the first being when he was five and the last being a month before when he was seventeen. But Christian has been denying his claim because he feels that the way Max acts doesn’t fit with the image of being the mate of an alpha. It isn’t until Seth goes to see Christian and tells him to either accept Max as his mate or cut all ties so that Max can move on that they realize what Max is and what his special gift to the pack is. It’s a spoiler, so I’m not going to tell you.

Christian is the Alpha of the pack and has been since his parents were killed in an accident. He constantly finds himself exasperated by Max and compares him to his mother who was sweet and kind. It blinds him to what Max is, and so he denies that Max is his fated mate. Although he does do little things that prove that Max is his mate. When he realizes what Max is, he feels that he has to prove to his mate how much he’s appreciated before he will claim him, much to Max’s frustration. I did find Christian to be kind of abrupt when talking to Max or Seth on the phone, but he always gave Max what he wanted once they were dating. They were cute together. I liked their chemistry together.

Seth is the best friend of Max. Seth’s special gift is his ability to cook delicious things. When Max gets kicked out of his house, the alpha allows them to live over his mother’s sweet shop in town while they go to college. They quickly decide to get permission to open the shop again as a bakery called “Sweets and Meats.” But first, they have to get their degrees. Seth goes to study cooking and Max studies business. Although Max is good at accounting, it isn’t his special gift. I liked all of the cuddle time that Max gets from Seth in a purely platonic way.

I recommend this book for anybody that’s looking for a sweet short read about fated mates with low angst and drama and no on-page sex scenes.