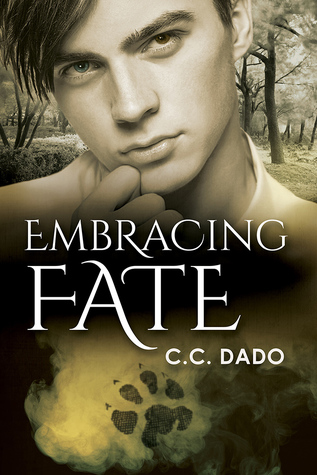 A Series of Fates: Book Two
Sometimes you just have to embrace your fate.
Seth has a secret: he has a crush on the human next door. His brilliant plan to meet Jack, the man of his dreams who happens to be an animal trainer? Take wolf form and ask his best friend, Max, to take him next door for training. Seth is the only one surprised when things go horribly awry.
Still, can this shy wolf and a human meet their fate as mates?

Embracing Fate is the second book in the A Series of Fate series by C.C. Dado. This book is just as good as the first book. The plot is fun, and the characters are lovable. It’s a short story, and like the first book, there are no on-page sex scenes. I did like getting to see more of Max and Christian and Zeus, who is the alpha’s second-in-command. Oh, and I did like how some of the lies that Seth tells end up having some funny consequences. Poor Zeus is never going to believe anything Seth says again.

I greatly enjoyed getting to read about Seth finding his mate. That his mate is a human and a dog trainer is a complication until Seth convinces his best friend Max to pretend that Seth, in his wolf form, needs training. His best friend tries to point out that it isn’t the best idea since the towns’ people, which go through a very strict background check to get to live there on a month to month lease, have no idea that a wolf shifter pack owns the town. Seth and Max risk the alpha’s displeasure should Jack, the dog trainer, find out that the wolf he’s training is actually Seth, his next-door neighbor and owner of Sweets and Meats bakery. But Seth can’t think of any other way to interact with his mate with how painfully shy he is and the anxiety he has around strangers. What they didn’t expect was that Jack would form such a close bond with Max’s pet wolf that he would want to adopt him from Max. One of my favorite parts of the book is when Jack, Seth in wolf form, and Jack’s dog, Winston, are all basking in Jack’s yard after a training session and they all fall asleep and Seth shifts back into his human form. And he has to sneak back to his bakery naked with only some shrubs to preserve his modesty.

I loved the part of the book when Seth is in the back baking, and he overhears his new neighbor, Jack, giving commands to his dog, Winston, and Seth’s wolf responds to them also leaving him sitting on the floor of the bakery and then lying there a minute later. I couldn’t stop giggling. And that was only one of the parts that had me laughing. The book was just fun to read, and sometimes you just want to be entertained without having to pay a whole lot of attention to make sure that you didn’t miss something.

I can’t wait to read the next book in the series Fearing Fate which is going to be about Zeus finding his mate.