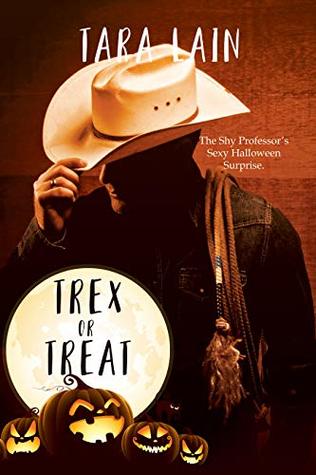 Josh Harris is all dad all the time. A busy college professor and devoted single father, Josh tries to be happy with only his son for company. But then Bradley “Trex” Trexler moves in across the street with his stepbrother, Bogo, and takes advantage of their empty home, making it into a haunted house for Halloween.
Josh’s son, Ernie, can’t wait to go, so Josh dresses up like a movie cowboy and saunters over. It’ll be the best Halloween of Ernie’s life, but there’s another sharpshooter roaming the dark corridors, and this one might have a special treat for Josh….
Second Edition
First Edition published by Etopia Press in Halloween Heat (IV anthology), October 2012.

Trex or Treat was a cute, sweet, sexy story by Tara Lain. It has great story building for such a short story, and I found myself smiling through the book as I was reading it. I really enjoyed the main characters and their families. I liked that both main characters are single fathers in a way. With Josh being a single father to his son, Ernie, and Bradley “Trex” Trexler being a father figure to his younger stepbrother, Beauregard “Bogo.” I also liked that they both are going to be working at the same university since Josh is a busy college professor and Trex is a grad student and TA, doing his final paper on homosexual activity in opportunistic settings, like cowboys who are thrown together out on the range versus being a biological homosexual. I also liked that he’s a fan of Professor Harris and is using some of his books for research on his paper. Trex had a little bit of hero worship that was really cute with the crush that Josh had on him. Trex also wasn’t shy about going for what he wanted, which was apparent when he invited Josh back to his haunted house for the adult party that was being held after the kids had all gone home. My favorite part of the haunted house was of the televisions playing horror movies and how that changed during the adult party portion.

Overall, a super cute, sweet, and sexy short story that fans of Tara Lain will love. If there was anything that I would change it would be that I would love another book about this couple to see how their relationship progresses since the book was so short.